We had peaches and grapes for breakfast and I wore my brand new ebiko sushi socks I got from Harajuku the previous day before starting the adventures of the day at Tsukiji market.

I’d heard horrifying tales (well, horrifying for me) about the working crowds in the subway at very early hours in the morning before this so when we set out pretty early that day, I was quite nervous but despite everything, I managed to quell the uneasiness and the subway journey was actually a pretty pleasant one, like all subway trips I’d had in Japan. We had breakfast (rice with sashimi, prawns, tuna and miso soup) at this little corner stall with small wooden tables and stools while drinking free refills of tea that tasted like coffee. It was fairly early in the morning, about 9AM but I dared say there were more tourists in this area than any other place I’d been to in Tokyo, Caucasians especially.

Tsukiji boasts itself as selling the freshest Japanese seafood of a huge variety and after our breakfast, I was more than inclined to agree. The sashimi especially was so soft and sweet and the price wasn’t as daunting as ordering a plate of sashimi in Rakuzen or Sushi Zanmai. 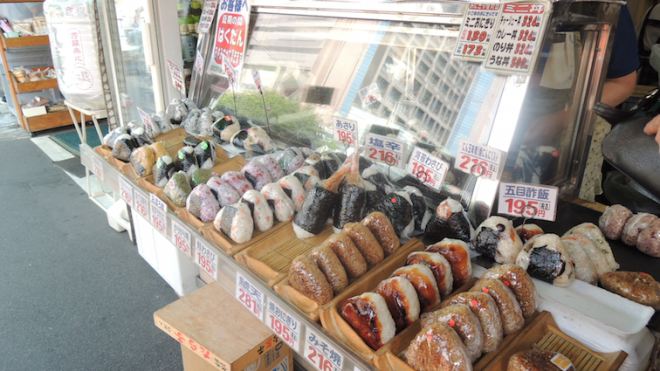 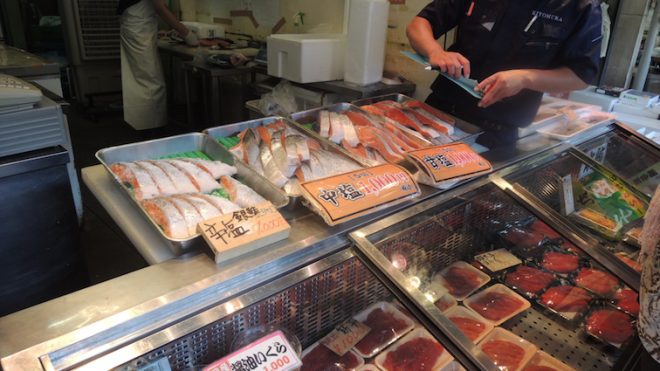 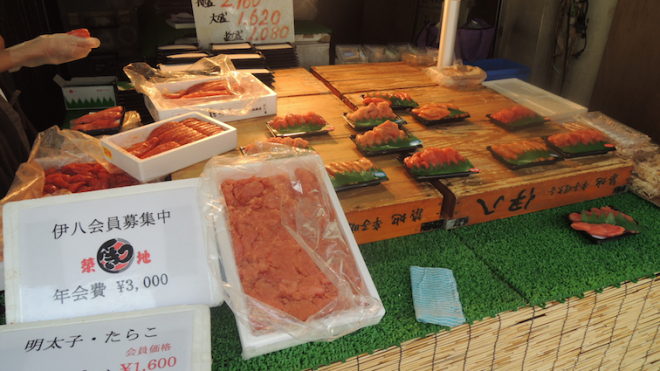 Then we passed by this shop that was crowded with people just standing there watching and you know how infectious crowds are, so we stopped as well to witness this guy grilling the biggest scallops I’ve ever seen, complete with a blowtorch and everything. It was like a performance; everyone was taking photos (with huge DSLRs at that) and spectating intently and eventually, we gave in and bought one to try as well.

It was so good. So really, really good. 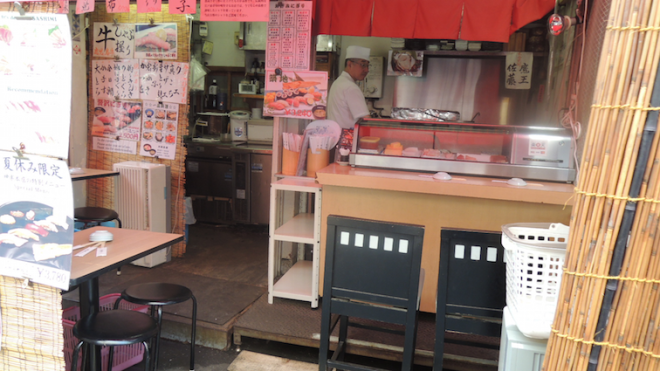 And then we turned onto a street that was filled with tiny eateries (mostly sushi and seafood as well, of course) that only had long tables and no chairs. Patrons all stood while eating their food on the tall tables.

At Tsukiji station, I got Rumin to take ootd photos of me with the pale green grid station wall as a backdrop.

We took the subway to Daimon, where we walked for about 10 minutes to get to Zojoji Temple. It was about noon on the dot when we left the station and the afternoon heat was relentless so after hastily taking photos outside of the temple, we took shelter inside the temple where there was a chanting recitation going on.

Rumin also told me that apparently, there was a scene in the Wolverine movie that was filmed here. 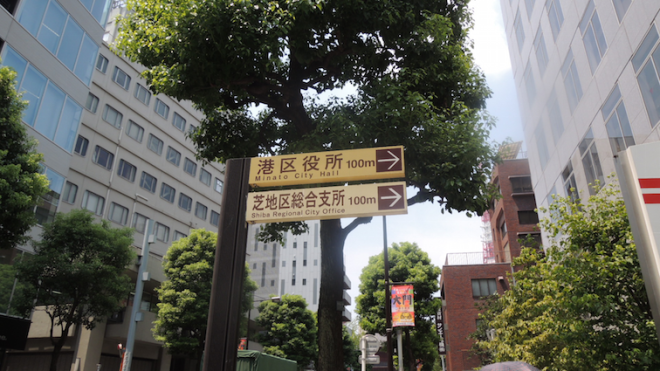 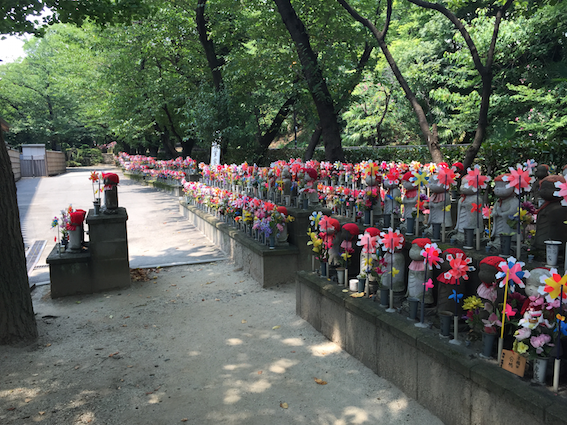 We commuted to Asakusa next. 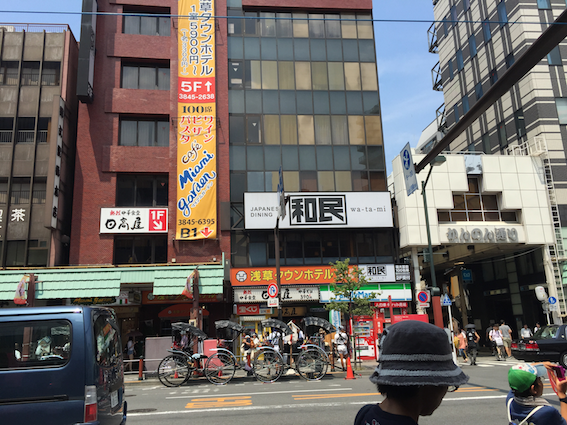 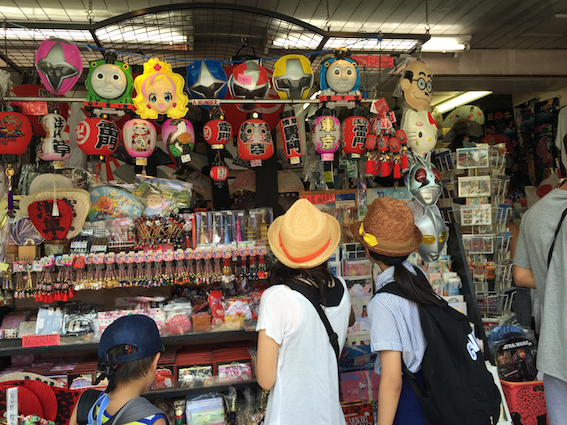 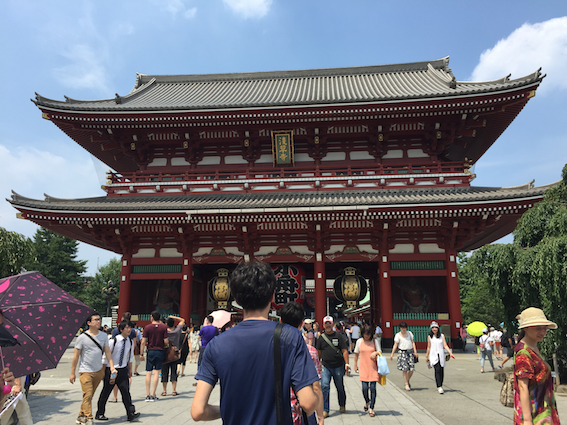 Sensouji Temple was absolutely jam-packed with tourists that I had to close my umbrella and walk as close to the shops as possible to rely on the roofs for shade to prevent my umbrella from poking someone’s eye out. The shop rows lined up on both sides mostly sold souvenirs and food but we didn’t stop to check out any of them because of the crowd and the heat. It was so hot that we rested for a while at the arches which provided shade and I got myself a Pocari from the vending machines.

Walking back to the station, we passed through some alleys that were filled with quaint red oriental structures with wooden doors, some of them hosting cafés while the others were also shops. I think Asakusa would’ve been a pretty nice place to visit was it not for the huge mass of people as well as the unrelenting heat (the heat, mostly).

And then we returned to the streets near the station in search for lunch and we weren’t too picky because it was getting late and we were all very tired and hungry so we settled for a Western food restaurant. Where we ordered pizza.

After lunch, we took the subway back to Ueno. 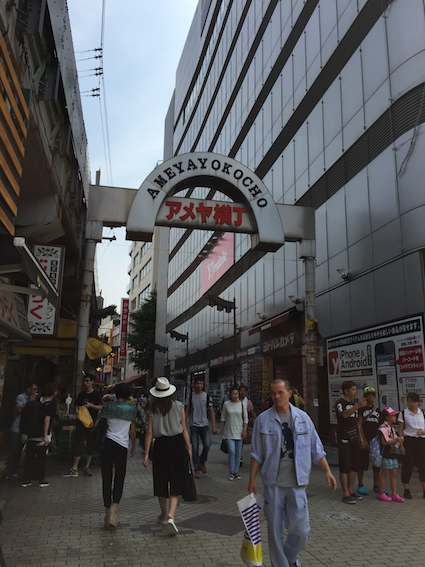 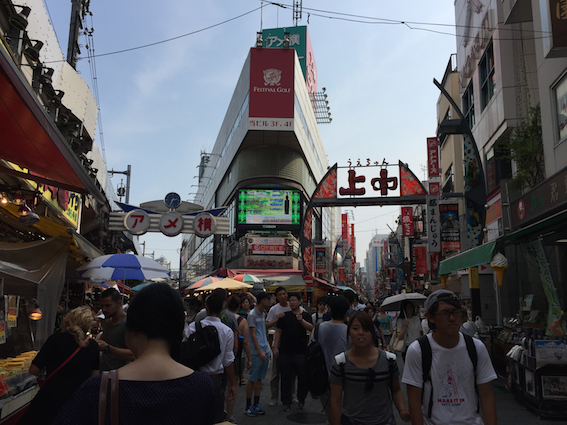 The only thought that kept on running through my mind the entire time I was in Ueno was how much Ueno reminded me of Hatyai. There were a lot of 100 yen shops and ABC Marts that sold shoes. Most shops were small but completely filled with products on sale (which were cheaper without international brand affiliations as opposed to higher end places in Tokyo like Ginza and Shibuya) ranging from clothes to watches to vegetables, reminiscent of the stalls in Hatyai market but bigger in size and with nicer stuff.

Then we went into a shop selling token Japanese food items and I stocked up on matcha flavoured everything.

We then had lunch at a small restaurant along one of the streets in Ueno that served unagi don. It was the best unagi don I’ve ever had.

I feel like all the food I’d eaten in Japan was tacked on with ‘the best __ I’ve ever had’ but it’s true, despite how little I ate.

And then after that we headed back to the hotel to drop off shopping stuff and freshen up a bit before heading for Akihabara. I had already started to get really excited in the unagi shop because I’d been looking forward to Akihabara since landing in Tokyo.

Akihabara was a mere 15 minutes walk from our hotel, and it wasn’t difficult to figure out when we had entered Akiba territory following the growth in number of anime shops (figurines especially), anime posters, anime music and people in cosplay costumes roaming the streets.

I left without buying anything and then I realised that Animate was just right next to it. I asked for 30 minutes from Rumin, her aunt and sister and then practically sprinted inside, to be welcomed gracefully by the Neon Genesis Evangelion theme song the moment I stepped in. 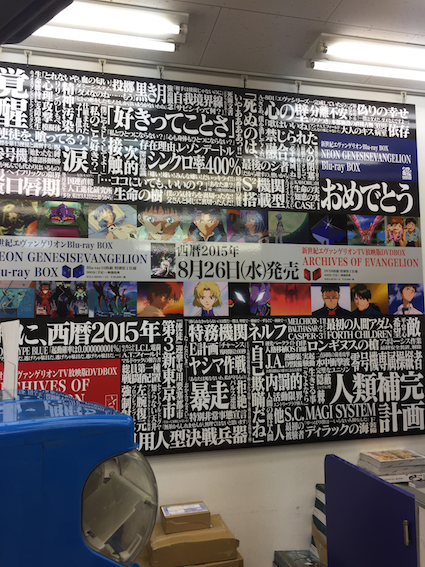 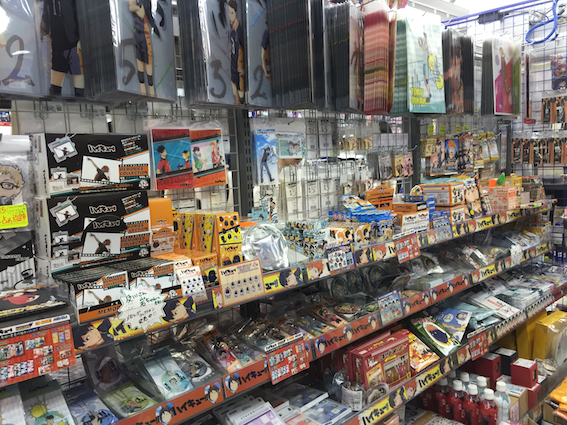 The Animate building had five floors and each floor had two sections: front and back. The first two floors were mangas/doujinshis/magazines, the third and fourth floor anime merchandises and the fifth figurines (not entirely accurate in the sense that if I remember correctly, the back section of the first floor were cards and video games and back section of the fourth floor also had figurines; I forgot to take a photo of the floor plan but trust me when I say that Animate is as comprehensive as it gets). I spent most of my time on the third floor after going through the doujinshi section, where most of the popular anime merch (Haikyuu, KNB, Tokyo Ghoul, SNK, Durarara, even Gangsta [Gangsta is gaining popularity really quickly and I’m so happy *brings hand to heart while wiping away single tear*]) were on display.

But 30 minutes were up very quickly and I didn’t get to explore the place completely before I ran down to the cashiers to pay for the stuff I bought. I wanted to try my hand at the coin slot machines again because 200 yen for a keychain wasn’t too bad so I changed 500 yen into coins and went for two rounds: one on the Haikyuu machine and the other on (Teikou-themed) KNB. I got Yamaguchi and Nijimura keychains respectively.

After I regrouped with Rumin, we walked around Akiba for a bit, taking in the ‘Otaku-Mecca-ness’ (this sounds so ridiculous but I’m not lying it is a frequently used term) of the area. Walking around for the next few minutes, it was safe to say that the biggest anime in Japan (or at least Akiba) was Love Live. There were huge signboards of Love Live on almost every high rise building and most posters stuck on the walls outside of shops were of Love Live. The music played on overhead speakers was also Love Live music. I’m sure I would’ve appreciated it more if I…actually remembered…to play the game on my phone… 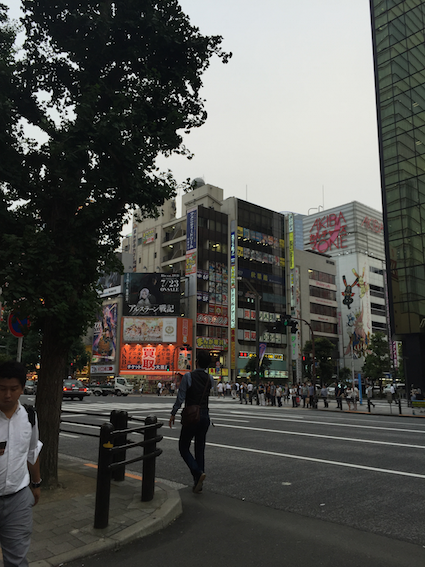 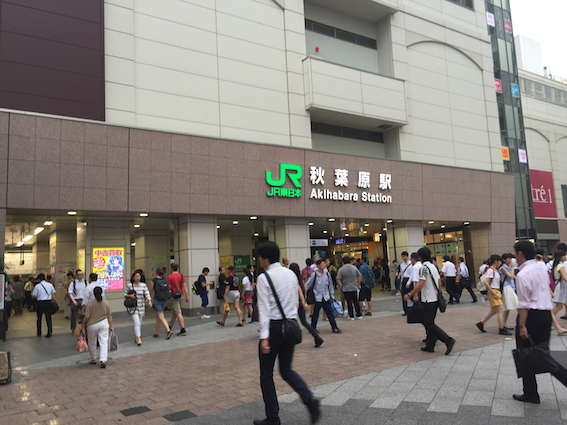 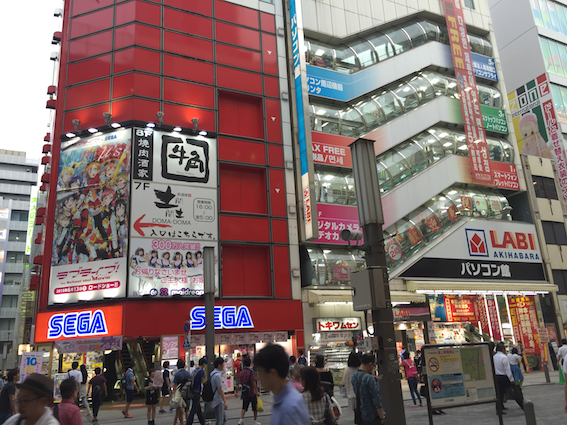 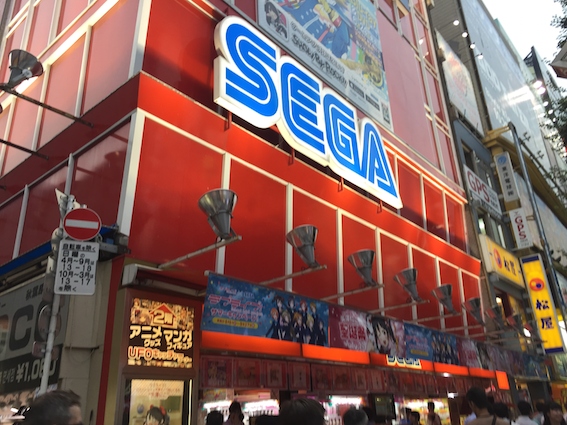 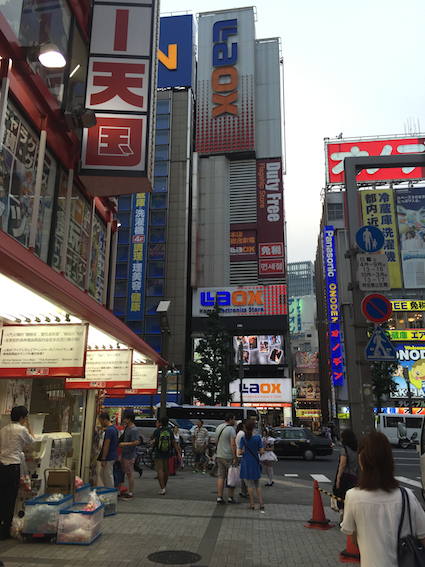 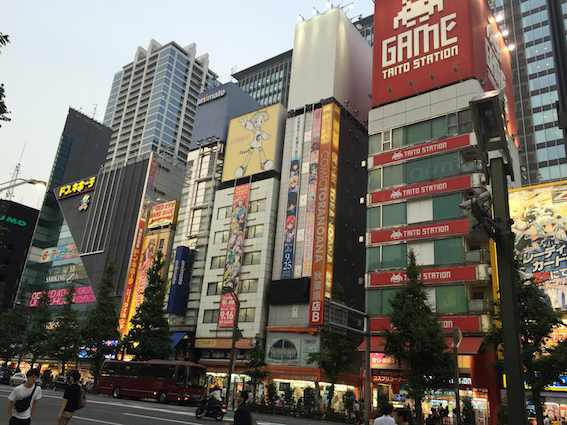 I would’ve loved to spend more time in Akiba but we had a bus to catch to Osaka that night. Nevertheless, I love Akiba and had felt a kinship with the district of anime culture that evening.

It didn’t quite hit me that we were leaving Tokyo the entire time we travelled from Ueno to Yoyogi where the bus station was. I walked past the Haikyuu poster at the Ueno 7-eleven for the last time and the subway ride to Yoyogi lasted for almost an hour, during which I read Gangsta on my phone while feeling conscious of my luggage hindering the movements of the other commuters at the same time. I was exhausted and honestly, all I could think about was the next thing to do which was to get on the bus so once I did, the realisation of leaving Tokyo struck me with the force of 10 sledgehammers.

We booked tickets for the ‘ladies only’ compartment so Rumin and I were pretty excited when we found out we could pull curtains to shield us from the sight of the other bus passengers. I watched Haikyuu on my phone for a while until I got sleepy, then when I put on music to go to sleep, Tokyo by Kinoko Teikoku was first on the playlist and I suddenly felt really, really sad to be leaving Tokyo. I really loved Tokyo; loved the buildings, the streets, the culture, the people (I never really mentioned this in previous posts but Japanese people are so overwhelmingly polite I always feel like running away because I don’t know how to deal with it) and so many more. Most importantly, I had had so many great memories and experiences here and I had grown very fond of this bustling and lively city and as the bus started to pull away from the terminal and onto the highway, I sent out a silent promise that I would be back.

Despite the heavy melancholy, feeling gross and sweaty from not bathing after a whole day of walking under the sun and sitting in a cramped bus seat, I fell asleep almost straight away from the fatigue and silently smooth bus ride, en route from Tokyo to Osaka.