As in the wordplay of “Dear Nara” but “deer” instead because…deer…in Nara…no?…ok

I slept rather restfully all the way to Osaka, waking up a few times in the night when the bus stopped at rest areas and Rumin got off but other than that, it was one of the better bus rides I’ve had.

It was around 8AM when the bus driver announced (over a built-in PA system not unlike that in an airplane) that we had arrived in Osaka but I couldn’t feel anything other than grogginess and grossness until the bus finally stopped at the Osaka bus terminal and we got our luggage, one-track mind focused on the desire to take a long shower and clean up before I could afford to do anything.

But first, under Rumin’s lead navigation, we had to walk a distance under the morning sun with our luggage in tow to get to our airbnb rented room.

The pretty arduously long walk was worth it though, because when we entered the room after spending a couple of minutes trying to figure out how to work the combination key code to retrieve the room key, the interior exceeded expectations and the first impression that popped into mind was that it looked as comfortable and appealing as an IKEA showroom.

Link to airbnb listing in Amemura, Osaka which I would highly recommend

It wasn’t a big space but it was just nice and it felt so homely for a home away from home and the beds just looked so inviting that it took all the willpower within myself not to flop onto it face first and sleep under the snug covers forever.

I was thinking that this was what my ideal university residence would be like.

We spent the next hour or so settling in (there were complimentary drinks and matcha kit kats and biscuits in the fridge *wipes tear*) and cleaning ourselves up, getting ready to head for Nara.

We had to pass through Shinsaibashi to get our train tickets to Nara so it was my first time seeing Osaka city in broad daylight (the walk from the bus station to our airbnb didn’t count because we took routes through narrow and secluded roads).

After reaching the station and having lunch nearby, we found a bus stop a distance away where we boarded a shuttle bus that dropped people off at Nara attraction spots. We stopped at Todaiji Temple first.

For some reason, deer are significant symbols of Nara, and the long pathway leading to the temple (lined with food and souvenir stalls on both sides) was not only full of tourists, but also free roaming deer. I was actually pretty excited to…see these deer…because one usually only sees deer at zoos in Malaysia but the novelty wore off after the first three minutes, marginal utility dropping to the negatives especially when we finally got to witness (and smell) their excretion and defecation processes live in action. 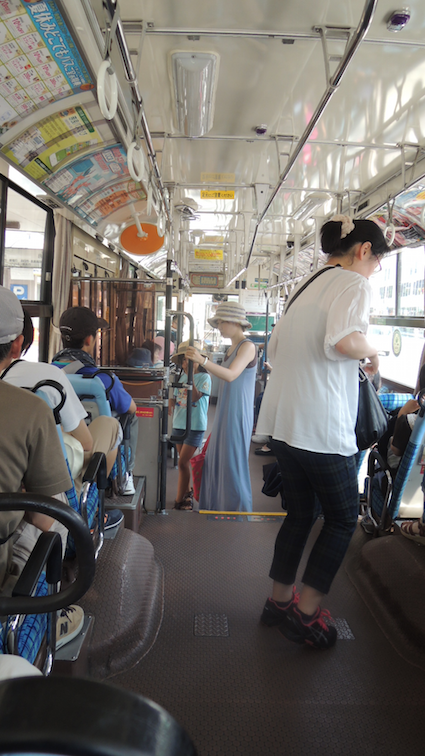 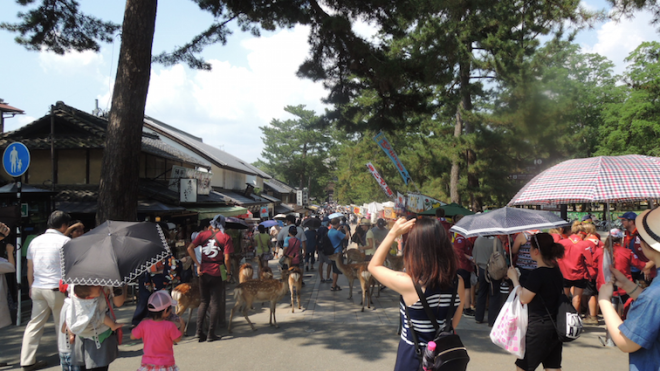 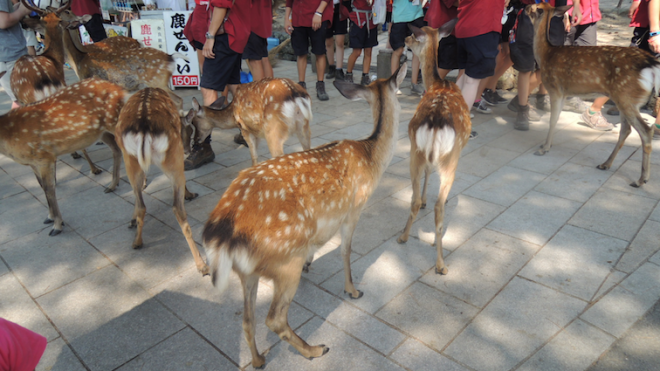 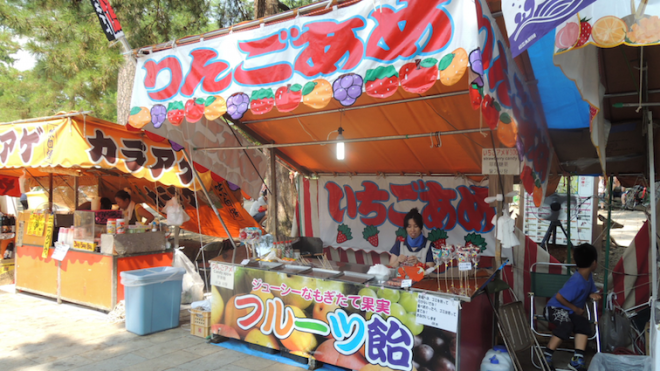 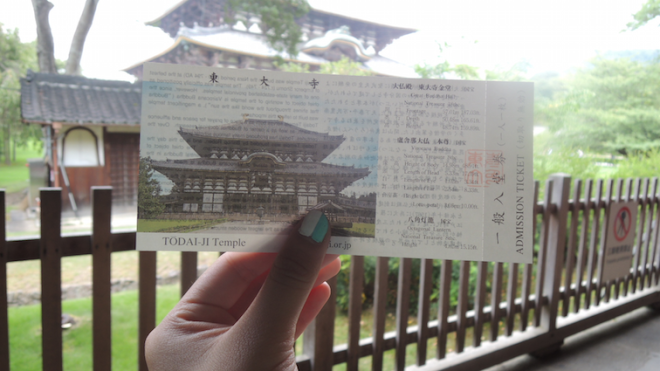 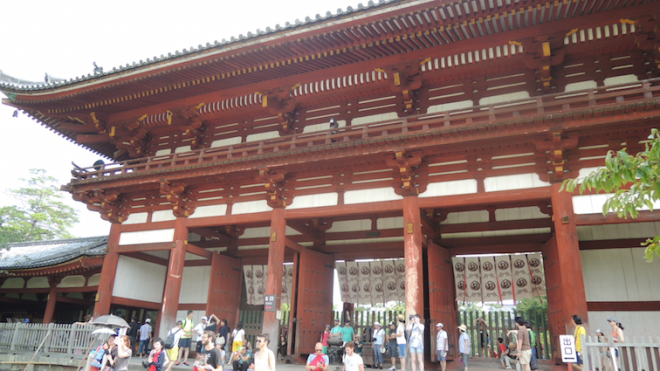 After exiting the temple, we walked a kilometer along a very nice pathway surrounded by tall trees which provided cool shade. At the entrance to Kasuga Taisha, it started raining so that was a nice reprieve from the scorching summer heat. 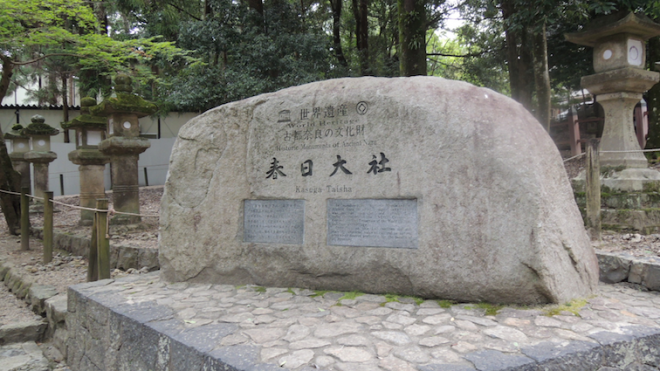 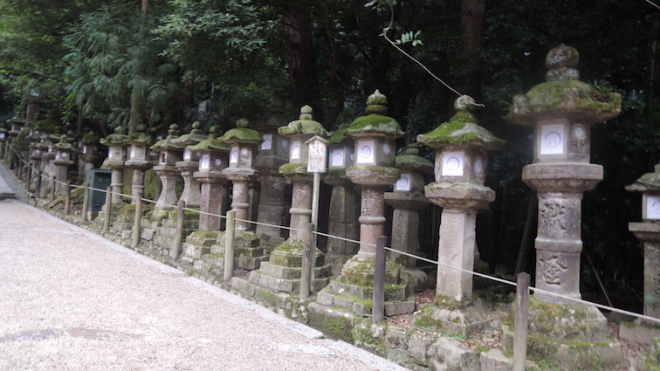 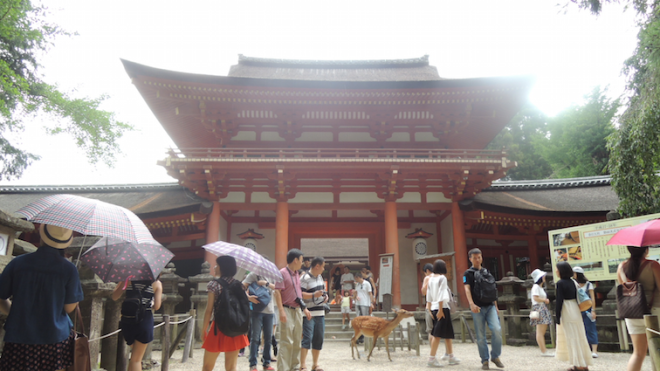 Then, we took the bus to Naramachi, couldn’t seem to pinpoint where Naramachi was exactly and found ourselves in a street called Shimomikado. We had udon dinner at a deer-themed restaurant (disclaimer: they didn’t serve venison [or maybe they did but we didn’t order it] but they had like edible deer-prints on the soy wrappers in our udon it was really cute). 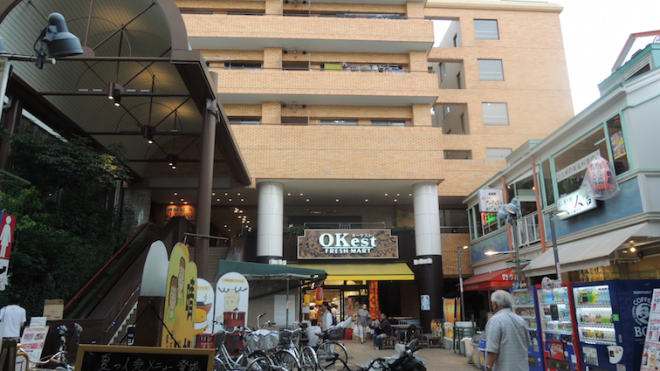 We had seen posters advertising a sort of lamp-lighting ceremony/festival (Chugen Mantoro) not far from where we were so we decided to stay in Nara a little bit longer to witness it. Come nightfall, we noticed more and more people were clad in yukatas and getas heading for Sarusawa Lake where the ceremony was going to be held at. 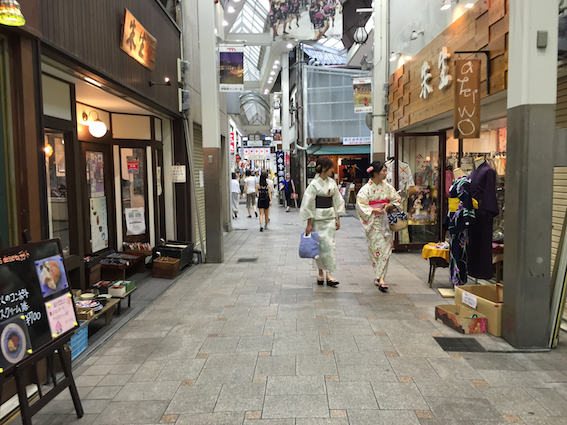 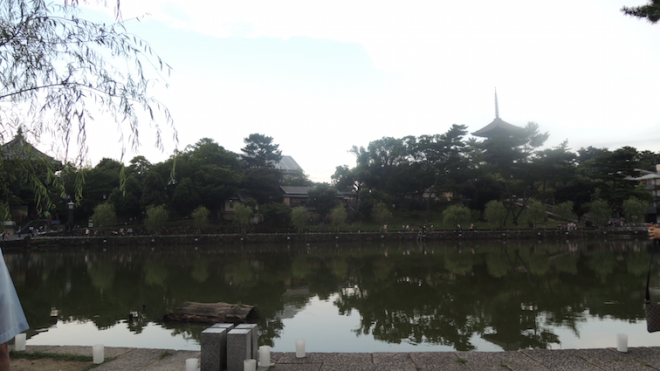 And then we lurked near a pagoda temple and switched on the portable wifi provided by our airbnb hosts, waiting until the sky turned dark. 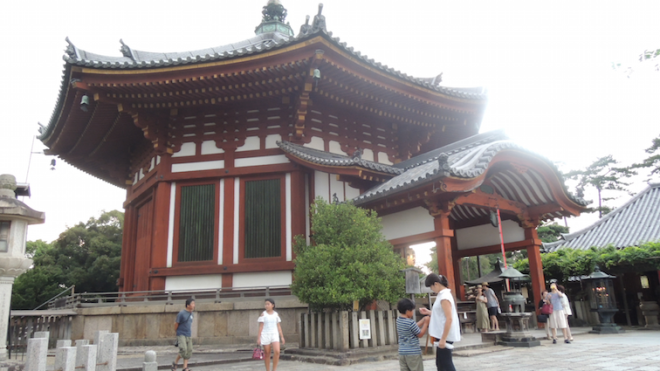 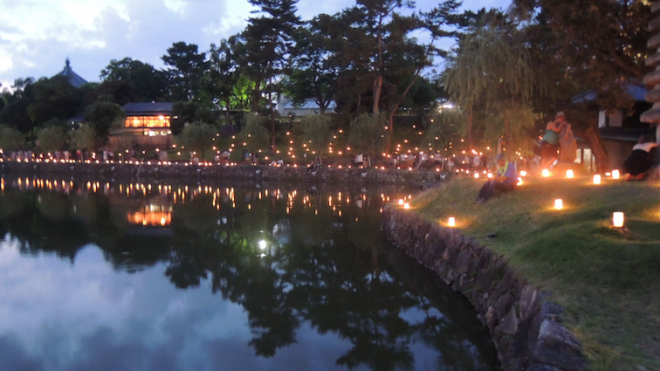 The entire place was so breathtaking and magical, it didn’t even feel like my surroundings were real anymore. I don’t even have anything to compare that night’s experience to because I’d never seen anything like it before. It was so surreal, ethereal, even.

Upon reaching Osaka, we hung around Shinsaibashi for a while and we even got to watch a water spurting performance along the Dotonbori canal. 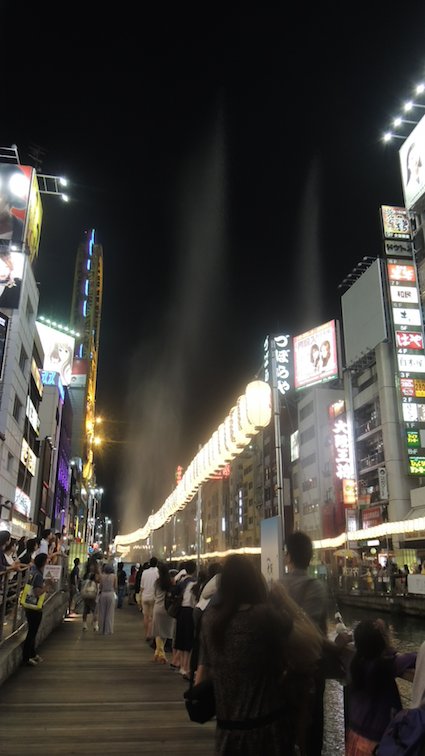 When walking through Shinsaibashi to head back to our room, we passed by a huge SEGA arcade and I saw a signboard right outside with the Ichiban Kuji logo on it and in an instant, I’d assumed that they would be selling anime merchandise inside so I went in while Rumin, her aunt and sister headed for a pharmacy a few lots down the street.

It became apparent very quickly, once I’d scoured all four floors, that the entire place was filled with arcade and coin slots machines only and no merchandise sales anywhere. With the 500 yen I’d lost in Ikebukuro still lingering bitterly at the back of my mind, I wasn’t exactly itching to go for some rounds on the machines but I still had time to kill before our agreed rendezvous so what the hell, I searched for the Haikyuu machines and this time, they had the large figurines I’d seen sold in many shops in Akiba.

This arcade was emptier than the one in Ikebukuro, and it wasn’t difficult to guess why. The boxes in the machines were placed carefully so it would be almost impossible to get it even after a lot of tries, and they were placed on rubber rungs at that. If I’d felt hopeless in the previous arcade, I’d already given up upon first sight of this.

So in the end I just resorted to wandering around the place, watching people try their luck. I saw a guy who managed to get the box to fall halfway through the rungs but no matter how many times he tried to pick it up after that, it wouldn’t work and he left eventually.

And then at a different machine, I saw a different guy and a worker standing before it, the guy pointing at the glass screen before the worker opened it with a key, adjusted the box to the very edge of the platform and then closed it again. At this point, I  was completely frozen in place, eyes riveted at what had just happened. The worker turned around and I dodged behind a machine but I definitely saw the box drop and the other guy picking it from the flap in the machine.

What was going on!!!!!!! My head was filled with question marks and I was too curious to leave the place without finding out what had just happened, so I continued walking around as inconspicuously as possible while secretly tailing the worker.

The same thing happened another two times, and with a different person at that. My mind was sifting through all sorts of possible theories: maybe these two guys worked here? Or they were actually the bosses of SEGA? Maybe they were related to the worker? Maybe this was actually common practice that wasn’t unheard of and all you had to do was ask? The last one didn’t seem very likely or there wouldn’t be a niche market for arcades but I was just so dumbfounded and mystified and hey, maybe I was desperate to get that Iwaizumi figurine too. Desperate enough that I even whipped out my phone to google “Japanese arcade cheats and tricks” but all the results that turned up offered legitimate strategies to manoeuvre the claws and not secret passcodes you could whisper into the ears of SEGA arcade workers to get them to move the box around for you.

My attempt to be inconspicuous was greatly marred by the fact that 1) I was wearing a bright turquoise T-shirt and 2) I kept on exiting and reentering the arcade a couple of times, mortified that the worker had definitely caught me staring but unwilling to leave with an unquenched curiosity about this mysterious occurrence.

It was during this moment that I vaguely remembered Bellyn telling me about her arcade experience and how she and her brother managed to get the workers to adjust the difficulty level to their favour by asking them how to move the catchers. Deciding that I didn’t have much to lose (except maybe my dignity but that had already been a lost case a very long time ago that I’d given up on keeping track), I went up to a different worker, prayed that he hadn’t seen me walking around the arcade for the past 20 minutes (I didn’t think I could invest much hope in the prayer because as I’d said, bright turquoise T-shirt) and asked him in English how to play the arcades? while I was screaming internally who would enter an arcade not knowing how to play an arcade game!!! Am I right, stranger man!!! This plan in itself was already doomed to fail because he didn’t really understand what I was saying and I think I was already ready to give up the moment the words left my mouth (plus, he looked so baffled and confused that I was uncomfortable at his discomfort) but I persevered, deducing that if I was going to embarrass myself, I might as well do it all the way. Sorry, buddy, I’d already dug this hole for us and we’re ride or die pals for now whether you like it or not

He understood what I was trying to convey eventually, and I led him to the Haikyuu machines. He instructed me to deposit a 100 yen coin. I did. He pointed at the left arrow button. I pressed it. Then he pointed at the forward arrow button. I pressed it too. The UFO catcher descended and he held out a palm, the scene unfolding before us self-explanatory. My voice was too high, too fake when I exclaimed an “Ohhhhh” and he left without a word.

I’ve always read fiction of how the characters in novels “feel their cheeks turn hot in embarrassment” but I could never relate to it but in that moment. In that moment I related to it completely one hundred percent and without flaw and if it was socially appropriate to run out of a shop, I would’ve done it but instead I surprised myself by discovering that I still had restraint left within me to merely brisk walk out of the arcade, taking care not to make eye contact with anyone lest it landed upon the eyes of the poor worker I’d just lied to. I left, and despite our rendezvous being in front of SEGA, I walked down a few lots so no one from SEGA would see my goddamn turquoise shirt and leaned against the wall breathing a sigh of relief, cheeks burning up and heart beating so fast as I laughed silently into my hand and typed out a series of rants with trembling fingers.

Rumin and the others appeared after a while and we walked back to our airbnb, my chest aching from suppressed laughter as I tried as best as I could to repress the mortification of the memory to be properly processed later in the safer confines of our room.

Fortunately, I didn’t have to undergo the painful dissection that night because like all the other nights I’d spent in Japan, I dozed off almost immediately as soon as my head made contact with the pillow.