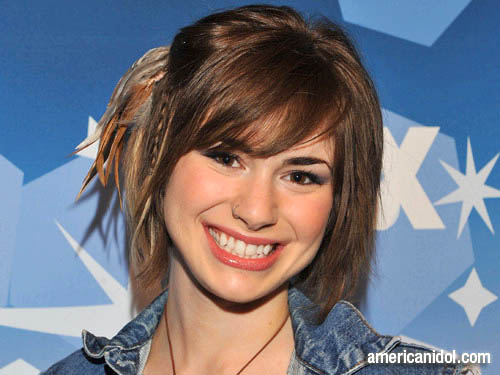 Right. So you’ve already figured out that I’m one of the Siobhan-bies now. Good for you.

She is my favourite right now. In fact, I have good reason for that. First, she is pretty. Okay, I might be a little biased about that, but she is. Even though she does look like Lovato a little when she smiles. Second, she has amazing vocals. Just look at her screams. She almost nails every performance each week, even the judges say so. (Well, for Simon. I have some doubts.) Third, she is unique. She doesn’t specify on a specific genre, like most other contestants do. In fact, I’m pretty sure she’ll do brilliant with any genre of song (but of course, she does best for screamo) and she had her own unusual trademark style, be it her singing or dressing or performing. And that is why many are dubbing her the female version of Adam Lambert; her high pitch scream being one of the similarities between both idols.

With such an amazing contestant in this show, I’m wondering why the producers don’t start naming her as the winner already.

Oh, right, because there is still the forever-Simon’s-favourite Crystal Bowersox.

Don’t get me wrong. I have nothing against Mamasox, but what I want to know is, why are people falling for Crystal’s performances instead of Siobhan’s? To be honest, I do not see the outstanding-ness of Crystal’s performances. She’s the country/folk kinda singer, and singers like her are way too abundant, now that everyone’s trying to mimck Taylor you-belong-with-me-but-i-still-need-to-write-a-love-story Swift. No, I do not have anything against Swift either.

People that shouldn’t even still be in the show are Tim Urban and Katie Stevens. Aaron Kelly is still in because he’s stealing young girls’ hearts from Justine Beaver. Michael Lynche is the role model of a perfect husband/father/man. Casey James is Kara’s eye candy and Andrew Garcia is still leaving people with memories of his supposingly amazing version of ‘Staight Up’.

Oh hi there, Lee Dewyze. Why the heck are you still here?