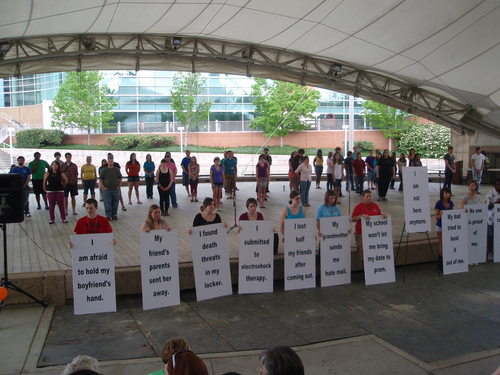 Grow up, leave school, get a job, get married, start a family. At least that’s how it’s supposed to work, and for the most part it does. But what about the growing percentage of our population who, by law, are restricted from marrying the person they love? Surely it is an injustice of human rights to deny gay and lesbian couples marriage. In a world filled with crime, violence, murder, war and hate, it’s disgusting that people have the nerve to tell each other that their love is wrong. Marriage is defined as the social institution under which a man and woman establish their decision to live as husband and wife by legal commitments, religious ceremonies, etc. This definition needs re-adjustment, as do our social and moral standards.  Homosexuals need to be accepted and treated as equals to the heterosexual population.

The year is 2010, we have iPhones, television screens of enormous proportions, digital radio, broadband internet, and the list goes on. We are evolving faster than ever, there’s no denying it. In reality, the human race can only evolve so far without equal rights. Arrogant and narrow-minded individuals are holding our society back. This is a worldwide issue, and although there are a select few states and countries which accept and allow same-sex marriage, there is still a long way to come. There is still a lot that has to change. This world cannot continue to advance if we are not united, and we will only ever unite when differences are pushed aside and acceptance is foregrounded.

You may have noticed the photograph displayed above. Perhaps you looked at it for a few seconds before you became bored and trailed off into your own thoughts. These are members of the homosexual society, not much older than you or I. These are real people, with real feelings and real problems. He is afraid to hold his boyfriend’s hand, and her girlfriend was sent away. That girl found death threats in her locker and the girl next to her was sent to therapy. There are countless others like the girl in the blue who lost her friends after coming out, and the woman next to her who receives hate mail. A high school banned one girl from taking her date to prom, another girl gets beaten by her father. And as if we needed anymore reason to accept the gay and lesbian community, there is a lonely sign reading ‘I’m not here anymore.’ It is painfully clear that the discrimination of homosexuals is more severe than most of us ever thought.

Not only are homosexual couples in Australia, and a multitude of other places across the world, prohibited by law from marriage, but they are continually discriminated against in everyday conversation. The word ‘gay’ has become a synonym for all things bad. How often have you heard the broken TV remote or large pile of homework sent referred to as ‘gay’? As minor as this may seem, it is just another barrier preventing homosexuals from living as equals to heterosexuals. Solving this minor problem may just make that major difference. Boycotting words with such negative and offensive connotations is just one of the small steps that we, as individuals can take to prevent the further discrimination of homosexuals.

Only recently has Australia allowed for a lesbian couple to conceive through in vitro fertilisation; something which should have happened much sooner. Newspaper articles and online message boards claim that a child with same sex parents will suffer due to their parent’s orientation. Some of the arguments include that the child would be bullied or that a child needs both a mother and father to develop, not two mothers or two fathers. Although it may be true that a child growing up with homosexual parents could be more susceptible to teasing, I believe that once society finally takes the steps to accept homosexuality completely, this will be erased. This is justified in a recent survey in which a group of 150 high school students were asked their opinion on same-gender marriage, and why they felt this way. Studies showed that 80% of young adults have been raised by their parents to either accept or reject homosexuality within society. We are the generation of the now, and we can make a positive impact on the generations of the future. To accept homosexuals, we are accepting that everyone is different, and that we all have the right to co-exist despite those differences.

We live in a world where our sports stars cheat on their wives and pop-stars last a mere 55 hours in a drunken marriage. Yet somehow, gays cop the blame for the downfall and tarnished definition of love. Love and marriage, a relationship shared between two people has been something restricted to a male and a female for a long time. Why does society feel that it is acceptable to discriminate against a group of people based on their sexual preference? Why do we feel the need to prevent two people who love each other un-conditionally from making the commitments involved in marriage? Sure, same-sex marriage is not the conventional fairytale image so often portrayed in cinemas, soap operas and love songs, but we cannot deny these people of their right to love any longer. It’s not the sexual orientation of homosexual couples that needs change, but the concept of conventional marriage and true love. We, as a population are so often blinded by our own ideals that we disregard the ideals of our peers. Stop for a few seconds, and take off your blind-fold. An open-minded view on homosexuality is something the human race would benefit from immensely, for once we open our minds we will open the gates to equality and coexistence.

Westboro Baptist church groups across the world, infamous for their strict values and well known for their picket signs hold the belief that homosexuality is unnatural, and that it should be barred completely. This group and many others like it hold protests at events ranging from pop-punk concerts to high school assembly’s with their picket signs reading slurs such as, ‘Fags doom nations’, You’re going to hell’ and ‘God hates fags’. We are holding the gay and lesbian members of our society in such regard that they are not treated as humans at all, when really,  they are our equals. Here I am, talking to you about ‘Gay rights’, but really, it’s ridiculous that there needs to be another set of rights for homosexual people. Westboro church states on their website that to be homosexual is to go against God’s wishes, and that any heterosexual person whom does not explicitly condemn homosexuality is a ‘fag enabler’. I stand before you as a proud fag enabler, and I ask you to reconsider your stance on the matter. I ask you to stand up for your neighbour, and give homosexuals a chance. A chance to live, a chance to belong, a chance to love.

If we all, as individuals, take small steps to eliminate gay discrimination, I believe that eventually, society will follow. Change is can be as easy as simply being accepting and treating the homosexual community as our heterosexual equals. A friendly smile can make a huge difference. On a more political level, there are many opportunities we, as young people have to assert our beliefs, for example protests and persuasive letters to your local member. Regardless of how  you chose to assess this problem, you must ensure that it is not ignored. Equality is of utmost importance, and we cannot let this slide.

Preventing a gay couple from the right to marry is like preventing two vegetarians to get married, or preventing two people with blonde hair from tying the knot. It’s time we started fighting back. It’s time the homosexual community are treated as our equals. It’s time for change.

This is the most meaningful and amazing thing I have ever read. It made me tear. Thank you, Emily.