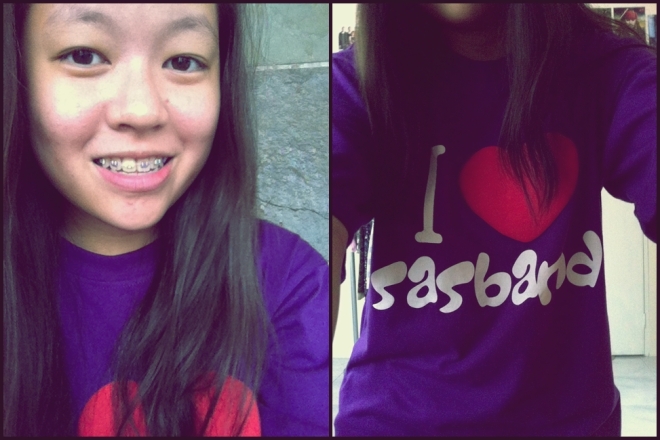 So, sorry guys I’ve been missing in action for two days.

You see, I was sick.

Lame Ryan-Higa-imitation aside, yes, I had my braces changed today and yes, I changed it to purple/white because of the SASBAND fever in the air.

SASBAND is also known as Sultanah Asma School Marching Band, my school’s band, and recently it’s all the rage in our school ever since their victory in the Zone BandComp and NatComp, earning the Number One title in the whole of Malaysia.

I know I’m not in the band nor have I actually shown much interest in the band before this but I’m just going with the latest trend in school, so.

Nah, it’s not just that. I am mighty proud of the band girls. They’ve already started practising from dawn till night a month before the Zone BandComp. Remember when I had to go to school everyday for the whole two-week holiday in June for drama practice? Not only were the band members in school for the whole two weeks too, they stayed there, and trained from around 7am to late night 11pm. (Probably not accurate but those were the hours I saw them practising in the school’s parking lot.) Then, after winning BandComp, they continued practising again every single day for NatComp. So it would pretty much be a crime if they didn’t win both competitions.

“They’ve already won! So why still the Fever?”

Still the Fever because the competitions don’t end there! WorldComp is next week, and that’s what most people can talk about in school nowadays. Despite the fact that I didn’t follow the 11 buses to KL to support SASBAND in NatComp and also despite the fact that I won’t be able to support them in person for WorldComp, I still wanted to show my supportive spirit by changing my braces colours to the band’s official colours. And also wearing my ‘I Heart SASBAND’ T-shirt for today.

PS. YES, I WILL GET TO THE DH REVIEW SOON.