Last Saturday, Weston Hall organised a trip to Whitby for only £5 so despite not knowing where Whitby actually is and going against my natural instinct to sleep in and laze around on a weekend, I agreed to join the trip with Rumin.

It turns out Whitby is a sleepy coastal fishing town on the eastern shore of England. And when I say sleepy, I really do mean so because of the perpetually gloomy sky (Rebecca, a British Chinese who is also a Weston Hall resident whom I knew through Rumin, reminded us that this is how English weather actually is in contrast to the sunny days we’ve been having in Manchester for weeks now), colder and windier weather and also the fact that the tiny village is mostly populated by senior folks walking their dogs on leashes. It was the first time I’d seen so many senior citizens and/or dogs in the UK.

The bus journey to Whitby was rather tumultuous; I was greeted once again by my good ol’ friend motion sickness and the driver had to pull over with 30 minutes left into town and I had to walk into the nearest butcher’s shop to bashfully ask for a plastic bag that served as a mere placebo because the absence of it only made me more anxious and thus, made the nausea worse. Rumin brought up that if I did puke in the bus, at least it would be something I could write here. I didn’t puke, but I’ll write this in anyway.

Ironically enough, it was also the first time since landing in the UK that I felt the particular English vibe from my surroundings, if that makes sense? Manchester felt very internationally-influenced. Well, that’s because it is (especially walking along Curry Mile, you’d think we weren’t in the UK at all) and I reckon that’s what makes my experience in Manchester so far so different from my experience in Bath when I stayed with Sa Pek two years ago. Manchester is also an incredibly modernized metropolis, suitably catering to the interests of Generation Y evident in the form of bars, clubs, shopping outlets and fast food joints at every bend of the road and nook of the street. In contrast, Whitby is filled with narrow, winding paths flanked by tiny and quaint shops and cafés. There seems to be a niche market for fudge, toffees and sweets in the quiet town of Whitby. We then climbed to the top of a hill where the Whitby Abbey was situated, overlooking the entire town. Probably the climax of this trip was lunchtime, because we had fish and chips at a town that offered an array of restaurants serving specifically traditional English fish and chips. We had ours at a place called Quayside that had a long queue (you know something’s good when you have to wait for it) and a poster stuck to its display window claiming the bragging right of winner of the National Fish & Chips Award 2014. I really ought not to be surprised anymore by the absurd amount of things people give awards for but I was still astounded by how…English that was. 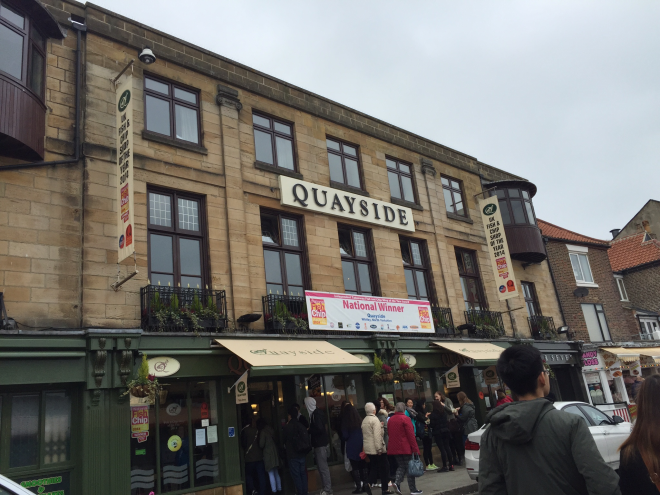 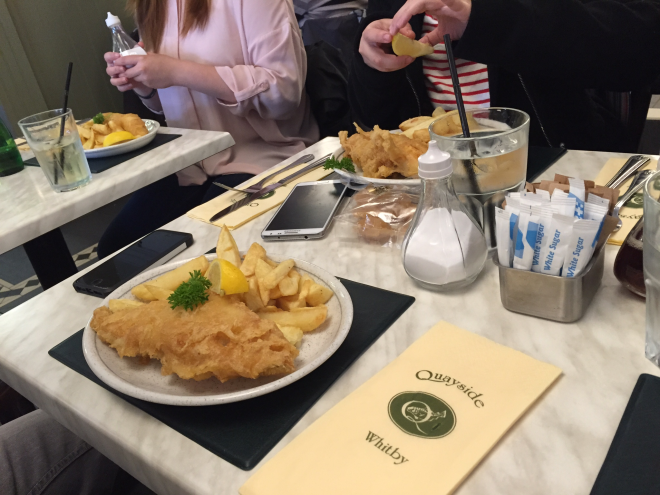 After lunch we continued strolling around with ample time to kill. The last time I was at a beach was probably two years ago during the Northern Road Trip at Batu Ferringhi. The Whitby beach was cold and windy and looked the part for the setting of an RL Stine book but it was actually pretty soothing looking at and listening to the waves washing ashore as well as the multiple dogs running around in the sand playing catch with their owners.

Despite not actually doing anything in Whitby for the whole day (we did do some shopping though…in Poundland…I bought nine rolls of toilet paper, two tubes of toothpaste and three packets of biscuits, all only for £4. You have no idea how happy I was to find a toilet roll pack of nine for £1 I’ve never seen such a good deal before in any other Poundland/Poundworld franchise in Manchester) we were pretty exhausted by the time we were to board the bus back to Manchester. Rumin was functioning on merely three hours of sleep the previous night and I had a motion sickness pill before the journey started so we were both out for the whole two hours plus of the return journey.

Overall, this weekend getaway wasn’t exactly exciting or stimulating, but it was pretty nice to go somewhere different for once. I’ve only been here for almost three weeks and I’m already starting to get bored of Manchester, which is highly worrying. If anything, I got to see a lot of dogs that day and that in itself was already worth the £5 trip. Always the dogs. I’ll always do it for the dogs.