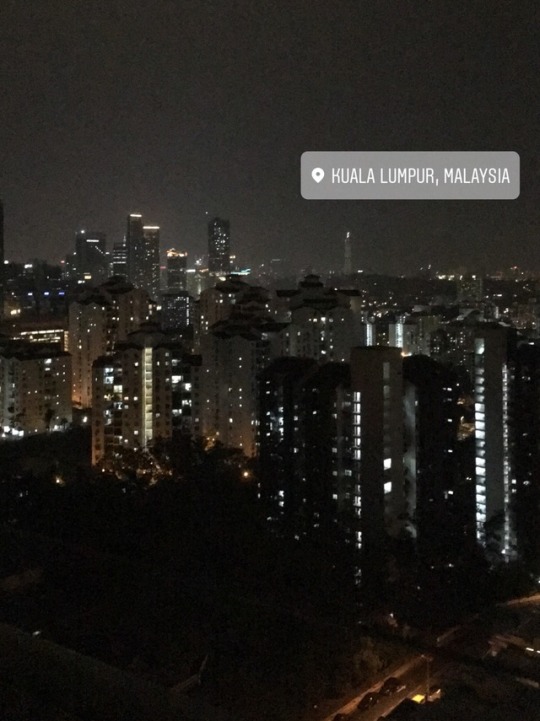 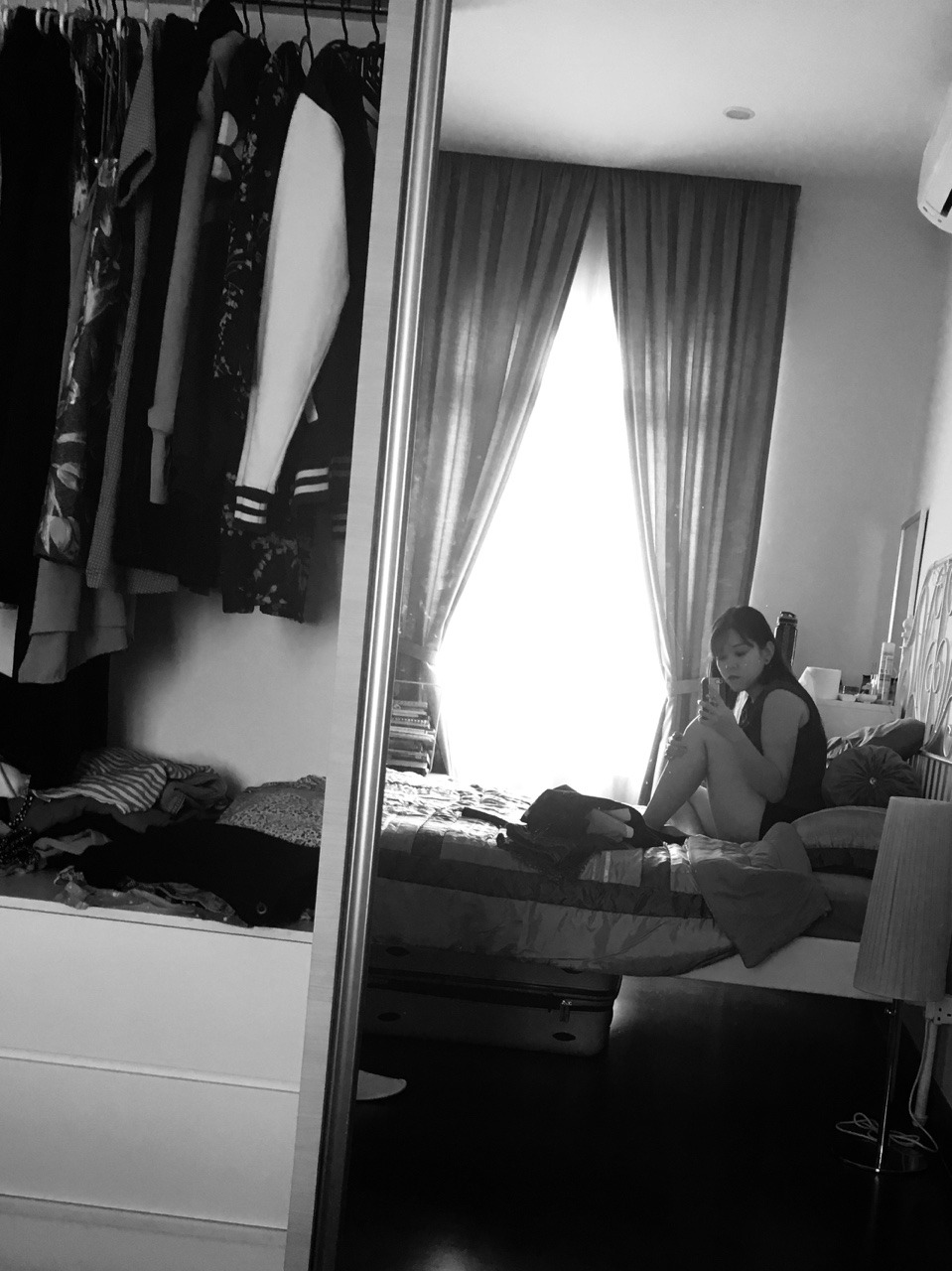 i’m in KL! have been for a month. after being relatively stagnant at home and anticipating my next phase of life, i am finally here. unlike manchester, i wanted a better beginning, which meant that i only allowed myself optimism paired with concurrent mediocre expectations so that i wouldn’t be pre-emptively closing myself off from all opportunities, but also i would come prepared with an airbag to cushion any fall in expectations, a mechanism developed over the years in the wake of crushing regrets and disappointments.

i don’t really know what i expected upon coming here, though. unlike university, living alone in KL (despite studying in the meantime) isn’t exactly an experience that comes with a predictable blueprint. even today, almost a month into my stay here, i have yet to find a steady footing on my routine here, which is at best, a little exhilarating, and at worst, incredibly terrifying.

i have always loved big cities. i have always romanticised big cities. to me, there’s always an inherent thrill of being thrown into the deep unknown that is so rich with a certain fixed culture interlaced with elements of unpredictability and surprise. like london. rome. paris. tokyo. bangkok. all very messy, but also exciting. it was precisely the inevitability of chaos and disorder ever-prevalent in a city that fascinated me; me, a creature of habit, a hermit confined within her comfort zone for almost as long as she had lived. studying abroad had instilled an addiction to adrenaline within myself that came with combating the norm of what i have known all my life, and taking on challenges that i would have absolutely recoiled from a mere three years ago. i wanted to be the exact opposite of myself, which is why i never hesitated at all to choose KL as my next destination within malaysia.

and KL never disappointed. ever so chaotic and tireless, it made london appear like a sleepy town. there was never a lack of anything to complain about once i leave the house. i don’t have a car, so getting anywhere by grab is blood-sucking. toss in some rain and rush hours and you get the quintessential KL experience of feeling helpless either squished among a sea of bodies that completely eradicates any concept of personal space, or stranded in a mall that has yet to even open its shutters just so you can wait for the grab surge to go down. chaotic, so chaotic. do i love it? sometimes. sometimes i still stare in amazement at the bright skyscraper lights of menara suezcap and TM tower from the smudged window of a grab on the way home approaching bangsar south, and sometimes i also still feel some inane sense of fondness at the sight of the endless red rear lights of a traffic jam at 6pm from the elevated view of LRT windows. there’s just so much going on here. so much potential. so many opportunities. it all feels so breathless and minute.

but sometimes, especially when it’s at night, it’s not so easy to focus on the romanticisation in the face of inherent loneliness. because i am alone, here. and suddenly, so many responsibilities surface when you are living alone. but right at the next immediate second, there comes the contrast of having absolutely nothing to fill your time with, no one to talk to. it’s so strange to me, even until today, because i’ve never been in this exact situation before. i’ve always had the privilege and comfort of familiar company in the form of family and friends at the start of my new phases of life, and i know i’m already 23 (god forbid i ever forget that when the whole universe seems to consistently be reminding me of it) but it’s always going to be an awkward arrangement for me to be completely by myself. it’s not even really a matter of self-sufficiency or lack of human contact, but rather the absence of reassurance in the form of The Idea That Someone Is Always There. it’s weird. there’s the freedom that i’ve salivated over for so long right in front of me, and yet i can only feel nothing but weird.

and nothing stands out more during this period of assimilation into KL city than the concept of contrast, the most obvious being the contrast between my life here and the life i had in manchester. it’s always a subconscious comparison that starts budding within my mind when i’m not paying attention, and especially during that brief moment before i fall asleep. everyone and everything felt so nearby and within reach in manchester, but KL just feels like a huge expanse of barrenness in which everyone is constantly busy and occupied, and everything is so distant and unreachable. a contrast akin to the bizarre and acute contrast between capitalism’s glaring divide of income groups reflected in a mere two-way road separating kampung houses with atap roofs and the integrated corporate hub of bangsar south filled with skyscrapers with glass windows and a mini-waterfall, a view that still strikes fascination within me whenever i pass by it everyday to go home.

does this contrast fill me with regret? it does, it still does. it fills me with so much regret that i didn’t fight hard enough to stay in manchester for another year, especially with the knowledge that had i chosen to remain in manchester, my current situation would be so much better off than where i am now. but at the same time, there is only so much blame that i can put on myself. and i realise that somewhere within me, there’s still a part of me that hasn’t totally given up on KL yet. sure, a lot of things suck. sure, i miss my friends so much when i’m home alone for the third day in a row, writhing in pain from gastritis without any luxury of human interaction. sure, i wish i could just reach where i want to go by foot when i’m stuck in a crowded LRT for 30 minutes, knowing that it’s the only possible route to get to class. but sometimes, rather than regret and all the what-ifs, i just think, “that’s how things be”. because really, i would rather blame my circumstances than my own actions anymore. it’s perhaps even more helpless to feel like there’s no way to fight against unfortunate circumstances, but accepting the fact that adult life is just generally tough for everyone and that the bliss of university life cannot stretch on forever, is easier in the long run. it’s just really…how it be.

which honestly, is also the same answer for me regarding my relationship with KL; do i hate KL? do i love KL? i’m still not done romanticising this metropolitan hell yet, but obviously it’s also not where i would want to be as of this moment. which is why, eh, KL is just KL. that’s how she be.

One thought on “lonely in KL: contrast”