I woke up at seven o’ clock today in an extremely groggy state and got dressed before heading downstairs and entering the car. JJ and Ean were my companions for the day again, repeating previous Gotchas and making me laugh till I cried. We had breakfast at a hawker store near Simpang Kuala, and it’s one way to Penang.

I was sleeping the whole time in the car, so serenely that my heart gave a leap when dad woke me up, saying that we had already reached the orthodontist.

Waiting in the waiting room with a book in my hand, I tried hard to concentrate on my book to keep my mind off what was waiting for me just a few feet away. But stuff like dental treatments stick to your head when you’re reading books like My Sister’s Keeper. Dialysis. Transplant. It’s as if the book itself was mocking my nerves and agitation. Heaving a sigh, I shut the book and shoved it into my bag. Darn Picoult. Instead, I tried to focus on House playing on channel AXN on the LCD TV hung on the opposite wall.

Bad idea to watch a medical show, too.

My heart thumping hard, I enter the second room when my name was called. A girl asked me to lie down on the long, eerie victim patient chair. Firstly, the girl, which was also one of the dentist’s assistants cleaned my teeth with a sharp, pokey object that I won’t even mention. Anyway, there was blood, so you get why I’m not too fond of elaborating more about that particular process.

Next, she polished my teeth with stuff I couldn’t see through closed lids. My lips were pulled wide apart with a (puller?) to make things easier; and creep me out more. She asked colours, and I smiled. “Can I use all colours?” And she said yes, much to my glee.

When Dr Looi came in, my heart sank in fear. Okay, so here comes the prosecutor. Gulp.

Picking up an incredibly sharp object, he said, “Don’t mind the sound when I slice your teeth, okay?” I was like, What sound? What sound are you going to make? Ugh. Nonono. So I closed my eyes, mostly to avoid the stuff splattering out of my teeth (okay, no, I don’t know what is splattering out of my teeth) and also to avoid the dentist’s eyes. Okay, no, you’re hearing…a lawn mower. Nothing else. It actually wasn’t very painful, only hurting a little when he touched the gums. I was expecting him to extract teeth, but when he didn’t after slicing my teeth, I was pleased. No, ecstatic.

Then he started applying these silver parts on each of my teeth, and I was sure there was no more pulling of teeth. The procedure took quite some time, and he left the girl to thread the wire through the nuggets, followed by clipping the multi-coloured rubber bands onto the braces. I was already feeling the pressure on my teeth, but it didn’t hurt at all. No.

I was grinning wildly when I went out to meet my parents. It wasn’t as bad as I had thought.

Next, we went to Queensbay to shop, and for once, I didn’t go to Borders, because I figured my parents already spent 4500 bucks on me today, so I won’t bother them with another burden. So I followed them into Jusco.

That was when my teeth started to hurt.

To take my mind off the matter, I continued My Sister’s Keeper and couldn’t seem to keep my mouth close. It was as if something was poking at my lips and it was irritating, so my mouth was a constant ‘O’.

I thought I could never get my mouth to close after this.

We went to Jusco in Bukit Mertajam next, and I was incredibly down, pain intruding my teeth nerves like hammers hammering on them repeatedly mercilessly. I only had Bubur at McD, and even then, it was hard to eat.

Only one word can be used to describe my condition.

We returned to Alor Star in time to attend Xin Tong’s birthday party at KFC. And I was welcomed by Jia Yuan, Jia Wen and Ai Chen swarming towards me, firing questions about my braces which I answered quite difficultly. Yuan even took the pleasure to mock me by eating a huge chunk of chicken meat right in my face. -kicks-

So I ended up eating mash potato and drinking Pepsi only. At least Chicky appeared to make the situation more bearable.

I can’t believe I just said that. 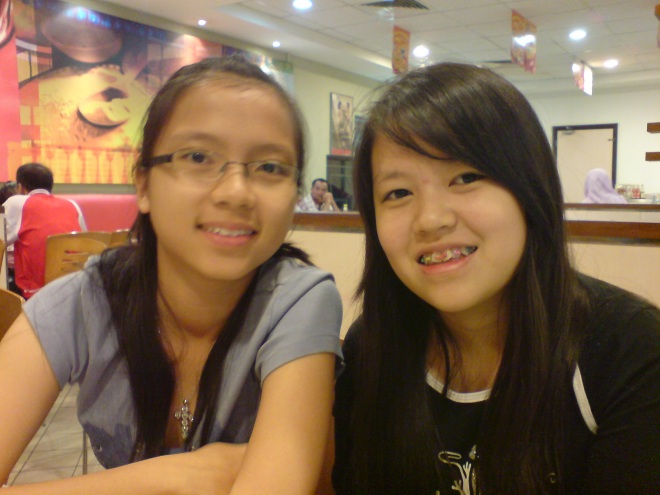 So yes, it still hurts right now and there is nothing I can do about it. D:

4 thoughts on “All Braced Up”