Contrary to his reason for the existence of such a week (which is his perfectionism leading to him deleting videos he made and end up not updating his YouTube channel), mine is more of a getting-my-lazy-ass-back-to-blogging reason.

Blogging hasn’t been easy for me lately because a) I have done nothing remarkable of late since all I do is go to school, come home, revise, sleep, rinse and repeat: the woes of an SPM student b) expressing opinions publicly on a website that many people I know in real life visit is quite a hazard and c) all that is left to acceptably talk about is One Direction and I’m pretty sure Careful Confessions has seen enough fangirling posts now.

Hence, in order to shed off this shell that has kept me from real blogging, I’m going to try this Mid-Life Crisis thingmabob  to see how it turns out. Mind you, my life is still going to be as less remarkable as it has always been but let’s put my Joy Detecting Skills* to the test. * the ability to detect entertaining and amusing moments in one’s mundane routine-centred life.

And now, as a sort of opening ceremony to my Crisis Week, I’m going to tell you about my day today.

I woke up blazingly early today: 8.30 AM, and couldn’t go back to sleep, which is surprising because 8 to 9 AM is my Roll Over and Go Back to Sleep period. So I got up, cleaned up and obeyed my basic human instinct to search for food in the kitchen downstairs.

No one was around though, so I went outside to find my parents washing the cars and the house compound so I went to help out. Two hours later, I was sweaty and absolutely famished as I threw myself into a 20-minute cold shower, feeling the cleanest I’ve ever felt in a while.

And then, because it was only right we treated ourselves after a long morning’s hard work, we had Indian food at Mysore Curry House and if it’s one thing in this world that can make me happy it’s Indian food. I could write ballads and sonnets about the glory and beauty of Indian food. When One Direction sang about “that One Thing”, they meant Indian food. 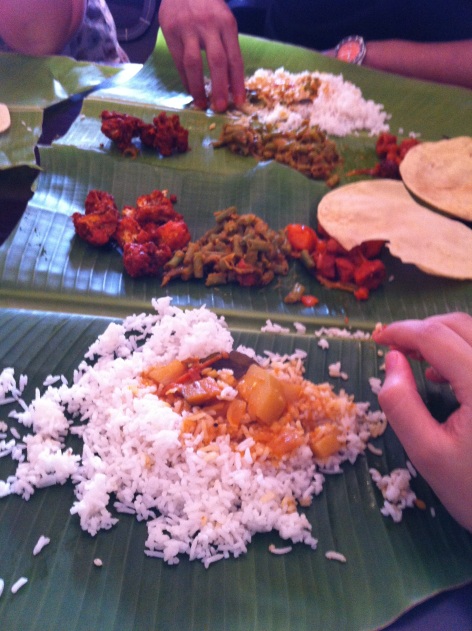 As usual, I overate and came to regret it later, but there’s no fault in eating good food because…IT”S GOOD FOOD!!

We went to Alor Setar Mall after that because it had been some time since we last went there (and also because I heard a new Chatime franchise had opened there) and…that’s what we did. I hate sentences like these, it’s so tedious and boring, let me rephrase.

Riding our horses, it took us about three days to reach the Mall, and even then, it took us half the time to get in because it was swarming with people. In the end, we managed to worm our way through the huge throng of people to get to Chatime, only to be surprised by the wild presence of a Factory Outlet Store which no one warned us about.

After I reached home, came the biggest highlight of my day: a three-hour nap. Actually no, that wasn’t the highlight of my day. In fact, it was the complete opposite. In fact, I think my day would’ve been close to perfect if it wasn’t because of that three-hour nap during which I had a horrible nightmare in which me and the other Form 5 prefects were at this yoga house and we were trapped there trying to look for a way out until we stumbled upon this long corridor with a steel door at the end of it so I started towards it but then I realised there were red laser beam tracks (which were tracks that showed where laser beams would go when they’re switched on) (and by laser beams I do mean the red coloured ones you see in movies which safeguard something valuable in a vault or something) (bringing back the multiple parentheses awyiss) covering the entire floor and surrounding it was a force field which induced uncomfortableness and pain so frightened, we left the room and looked for a way to escape until we realised that the entire house was covered with laser tracks so me and another prefect (I don’t remember who) exited the house and climbed to the neighbour’s house only to find it covered with the tracks too even though it was a “guardian’s” house and then we found out that the other prefects found a safety spot so we headed for the only room in the house that had no tracks only to have someone find us and tell us that the Safety Room was only available to old and sick people and we had to endure the laser beams when it was time and PLOT TWIST! that was how their “yoga” was carried out, by enduring low power (but still painful and headache-inducing) laser beams for a period of time and it was so horrible that when I woke up I had a throbbing headache and felt moody.

So that was all that happened, and I look forward to a successful Crisis Week. See ya!