One of the events I’ve been looking forward to for weeks is OneRepublic’s first ever Malaysian showcase at Sunway Lagoon’s Surf Beach. Upon finding out that they were including KL as a part of their Native Tour, I asked Soo May if I could be her media representative for KL Lifestyle at the gig; and she managed to get me two media passes for it. So naturally I roped in my housemate, Yi Jing to join me for the concert.

On the day itself, my exuberance fell greatly when I found out halfway through classes that it was raining very, very heavily. But thankfully, it stopped like an hour or two before the concert, which was super convenient.

So after classes ended, at around 5PM, we started heading to Sunway Pyramid, where we registered at the media booth. How disappointed I was when the man behind the booth said we could only go in at around 7.30-8PM so the next few hours were spent rather painfully, wandering around Pyramid aimlessly because all I wanted right then was to just go inside already. Even Irfan, my classmate and publicly-proclaimed OneRepublic buddy, who got VIP passes got to go in to queue up at the mosh pit already, so the wait was a little bit of a disappointment but then all of that was forgotten when we were finally let inside Surf Beach at around 8PM.

It was a mere crowd of approximately 5,000 people, so naturally it wasn’t exactly full. Despite being absolutely starved (I started getting hungry only as we entered Surf Beach…how convenient), both of us were determined to squeeze to the front (we had VIP privilege too as media people hah) and for once, I was glad for my petite size. The gladness, however, diminished when I realise that we were literally surrounded by tall people. As in, we had to actually tiptoe 80% of the entire concert to get a good view of the stage (but then again we were only about two metres away from the stage which was actually not bad). In order to get nearer to the stage, we had to take off our shoes because there was a huge puddle that most people avoided even though the puddle was, well, only two metres from the stage, but it was a sacrifice we were willing to make; and it was well worth it.

The concert started with full suspense as a white cloth was suspended over the stage, which was pulled off only after 30 minutes of endless shouts of frustration from the audience. And then the five members of the band were revealed and holy friiiiiccckkkkk were they amazing. It had been two years since I last went to a concert (Elton John) and three years since I went to one where people didn’t sit down during the entire show (Paramore). The adrenaline rush that surged through my system then was sudden but pleasant, and being in the general ambience where you were surrounded by people who were singing along together word by word was simply indescribable. At that moment, we were all as one as we danced and jumped and waved our hands about (not too wildly, in case you hit someone near you) and felt sandy water splash around our ankles and calves. But all that didn’t matter because at the moment, it was just us, the stage, and the music.

(Perks of being a media journalist: you get HQ photos for free)

And then super talented lead singer Ryan Tedder got on his piano and started belting out ballads in his strong voice of his (that was a billion times better live than in their records I kid you not) . Perhaps my favourite moment ever of the entire showcase was when Ryan made a medley out of Justin Timberlake’s Cry Me A River, Rihanna’s We Found Love and most amazingly, Coldplay’s Yellow. If I was sitting on a chair, I would’ve fallen off that chair. If I was hanging onto a rope, I would’ve let go of that rope.

And when they covered Kanye West’s Gold Digger I wanted to climb on stage and run around proclaiming my love and gratitude for the whole band. 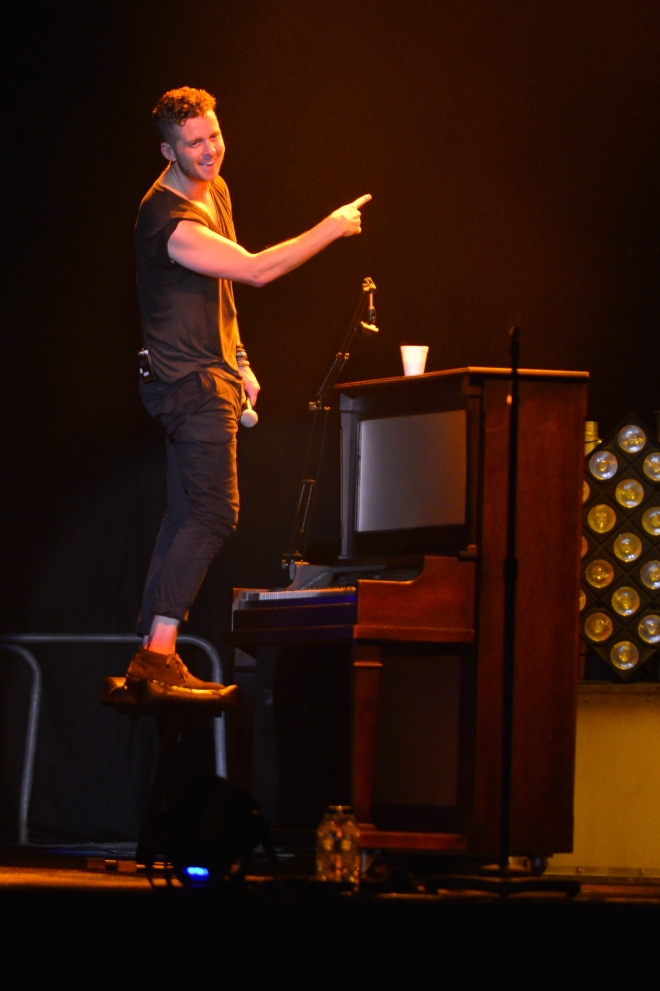 It also didn’t hurt that there was this super enthusiastic guy next to me who very obviously is an avid OneRepublic fan (judging by the way he knew every single word to every single song) and I daresay his excitement was fairly contagious. (Creepy note: he smelled pretty good as well, which is something you don’t meet very often at concerts.)

After the encore (which I, admittedly, did not realise was the encore), everyone refused to budge despite the fact that the band had already said, “Goodbye KL, thank you for coming!”. There was a certain…incompleteness to the whole show; like what someone I overheard said, they hadn’t even introduced themselves yet. Like they had left too early. 20 minutes after they left the stage, we still stayed put, clinging onto the slim sliver of hope that all five of them would leap out and burst into one final song before actually, finally leaving. But nope. All we were greeted with was random crew members packing up the equipments, much to our dismay.

After the show, I texted Kak Dena (whom I found out was at the gig as well) and we met up to catch up briefly during the entire journey out of Surf Beach. That was one of the more unprecedented but pleasant surprises of the night.

Despite it already being 11.30PM by the time we reached the apartment, the night didn’t just end there. We ordered 24 hours mamak for dinner, a dinner that we only finished at 2AM. So that was part of my eventful life as a college student.

There is a particularly different kind of joy that comes with attending music events, and safe to say, it is one of the most wonderful feelings in the whole world.

One thought on “OneRepublic Native Tour Live in Malaysia 2013”