The Coldplay hype had been going strong since last year when we bought our tickets to watch them perform live on the 4th of June at Etihad Stadium and now, it was finally upon us. Eight months later, we were finally watching Coldplay live for the first (and most probably last) time on their A Head Full of Dreams tour.

On Saturday, Rumin, Brian and I took an Uber to Etihad Stadium at around 5:30PM (we had reserved seating tickets so we didn’t have to queue), joined by Jovaynne who I later on found out was also going to the show, albeit seated at a different section. Etihad was already full of people and incredibly traffic jammed by the time we reached the stadium. We still had time before the first opening act started at 7PM so we attempted to find Yee Lin, Jia Yang and CC who were volunteering at the food stalls that night but unbeknownst to us, they were actually at a different entrance (out of approximately 40 entrances) from ours.

Our seats were literally second highest from the top on the topmost section, which also translates to 1) climbing an incredibly long flight of stairs that gave me mild vertigo and 2) the singers and band on stage appearing tinily ant-sized to us. But despite that, it was Coldplay, and the mere sight of the massive crowd and stage was enough to make me feel super excited in anticipation of what the night would entail. Ash and Ee Min were in the unreserved standing section and even managed to spot us (equally ant-sized) at our elevated position.

The first two hours were occupied with Alessia Cara and Lianne La Havas’ performances as opening acts. I’d heard of them before but not really their songs but they delivered, even though most of the crowd was just itching for Coldplay’s set to start already. 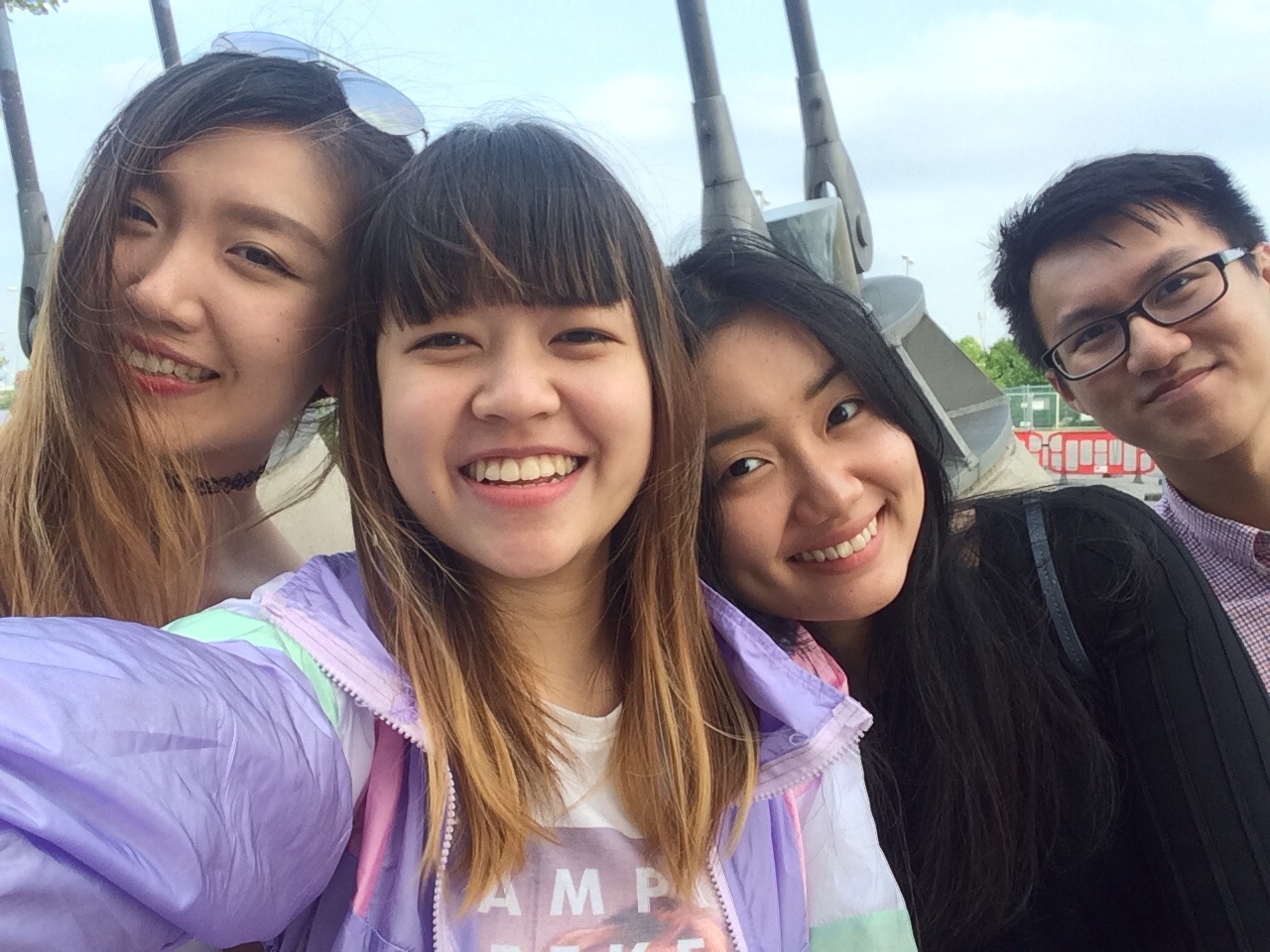 And then at 9PM, the background music died down and peals of excited screaming echoed throughout the whole stadium, mine included. It was actually beginning, one of the (if not the) best concerts I’d been to, even if I didn’t know it yet.

Bright rainbow-coloured laser lights lit up the stage while a rotating kaleidoscopic sphere appeared on the LED screen behind the band as Chris Martin started to run down the extended stage pathway, commencing the night’s show with A Head Full of Dreams. 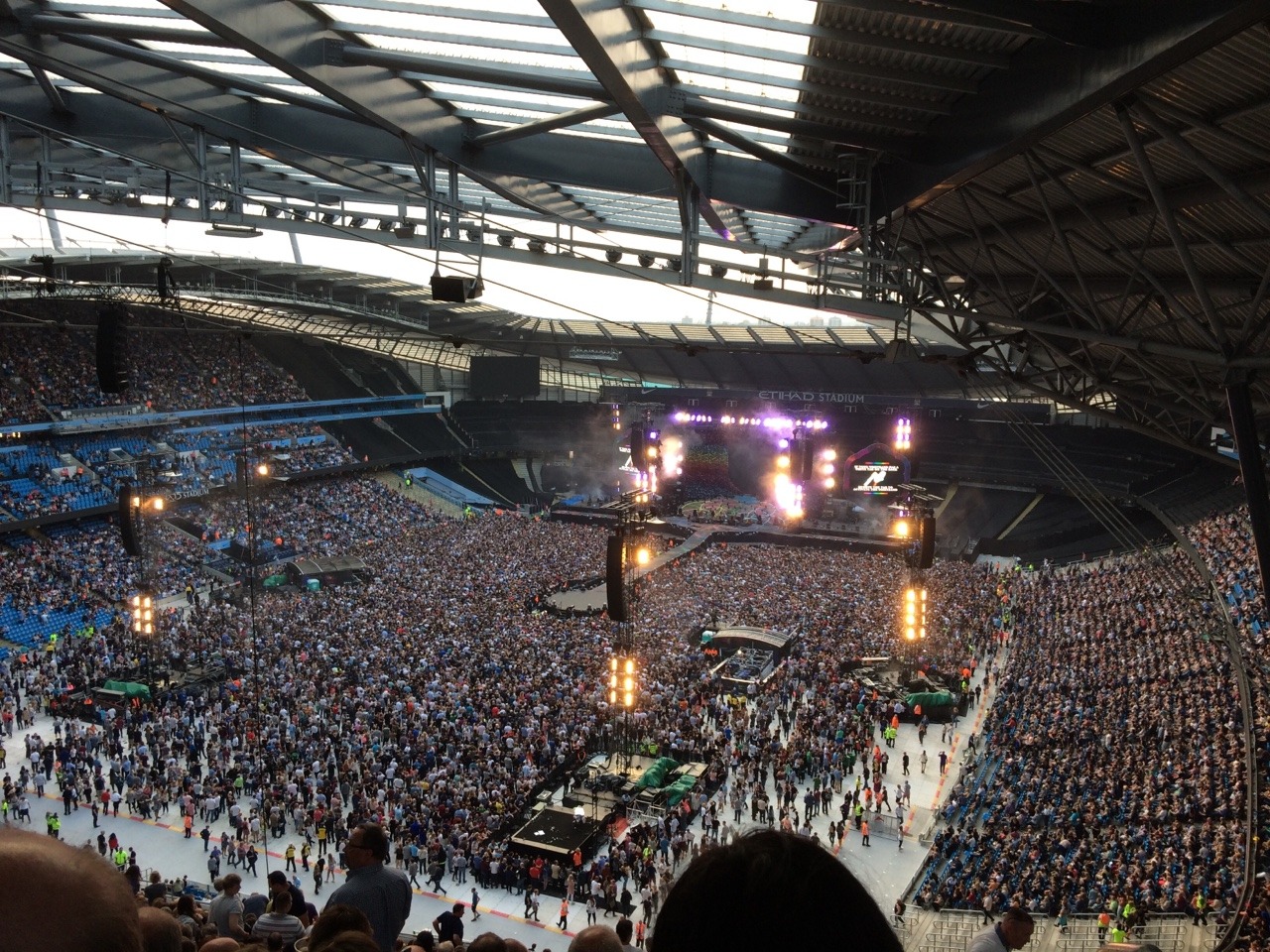 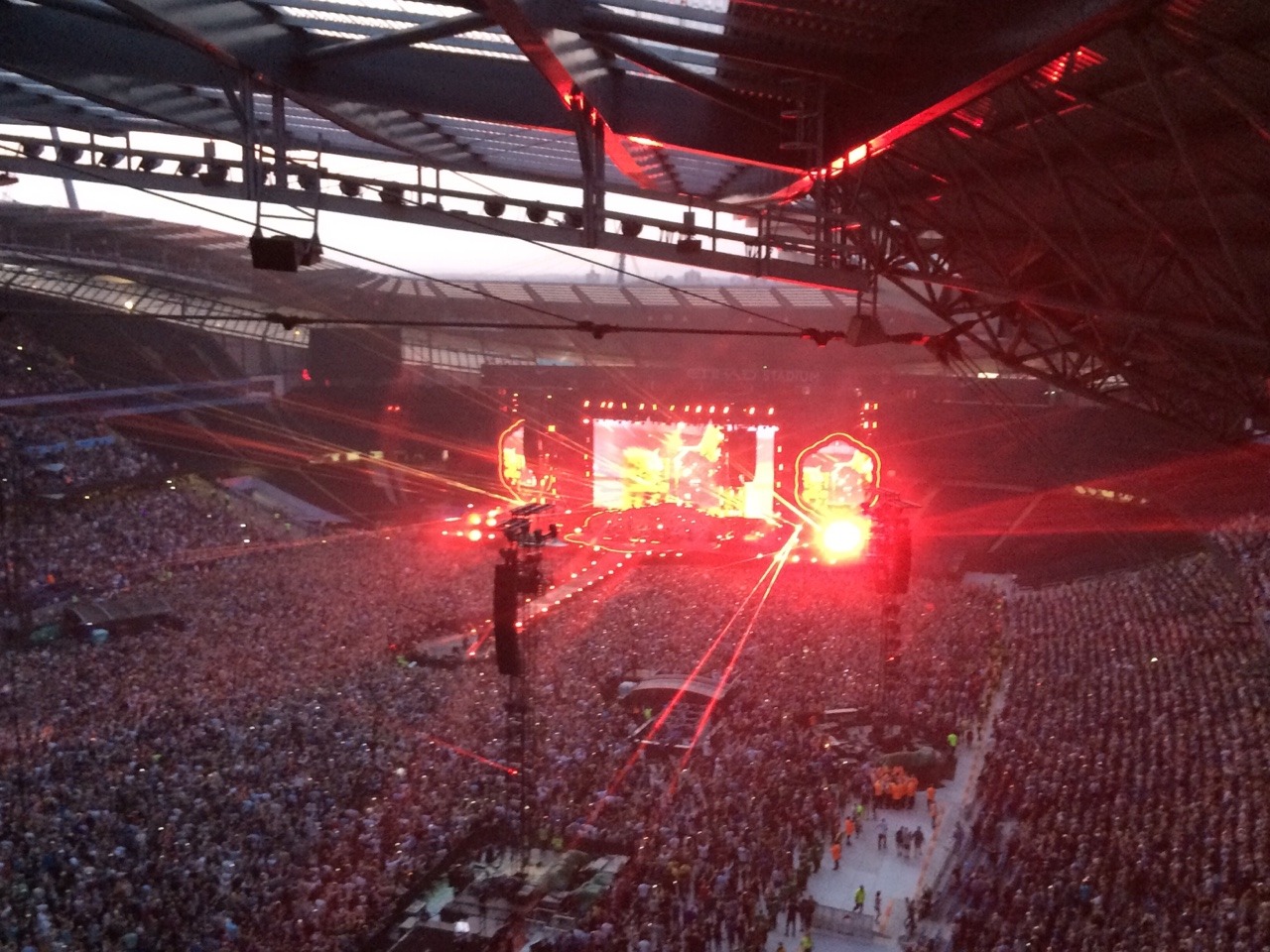 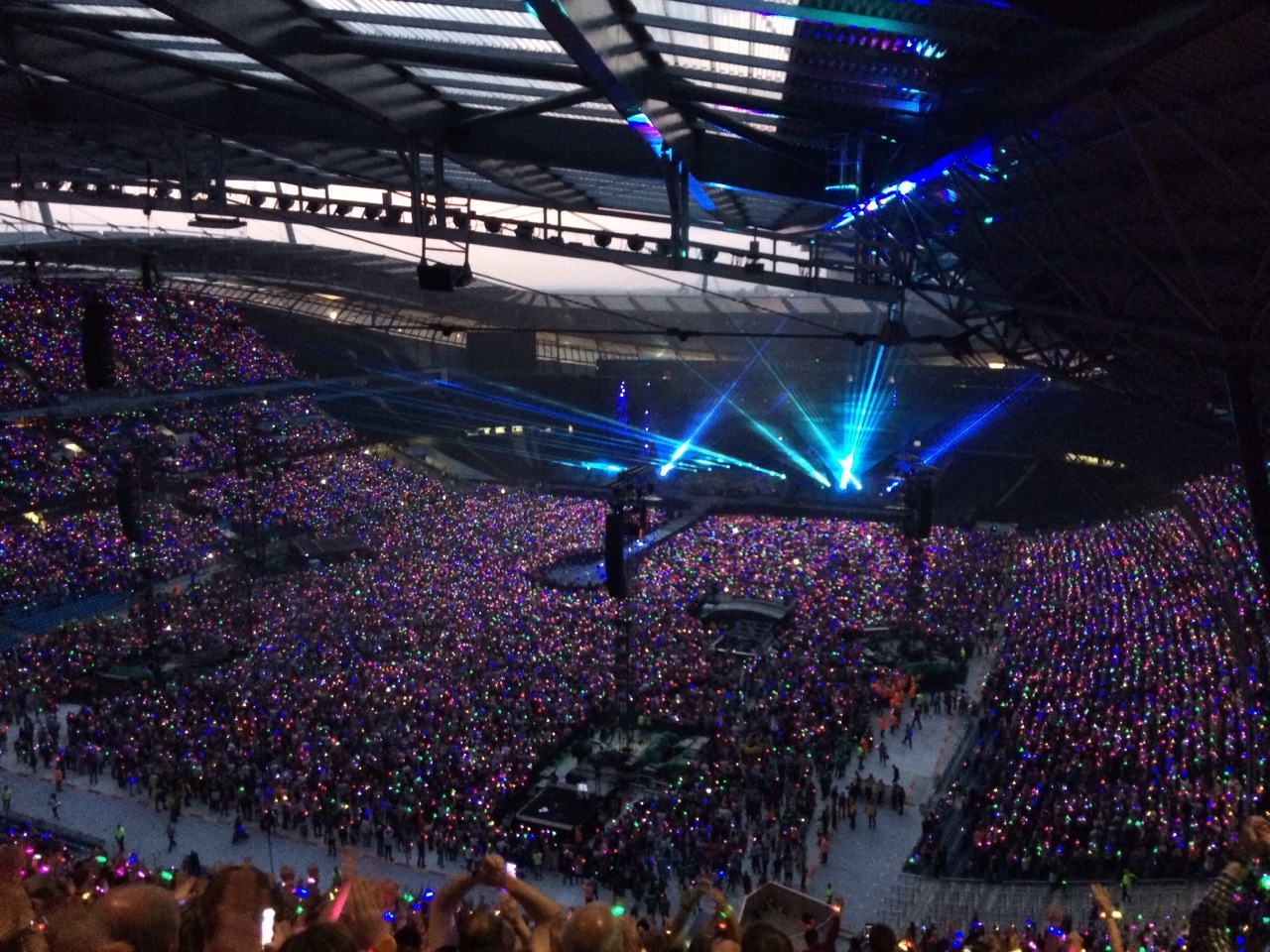 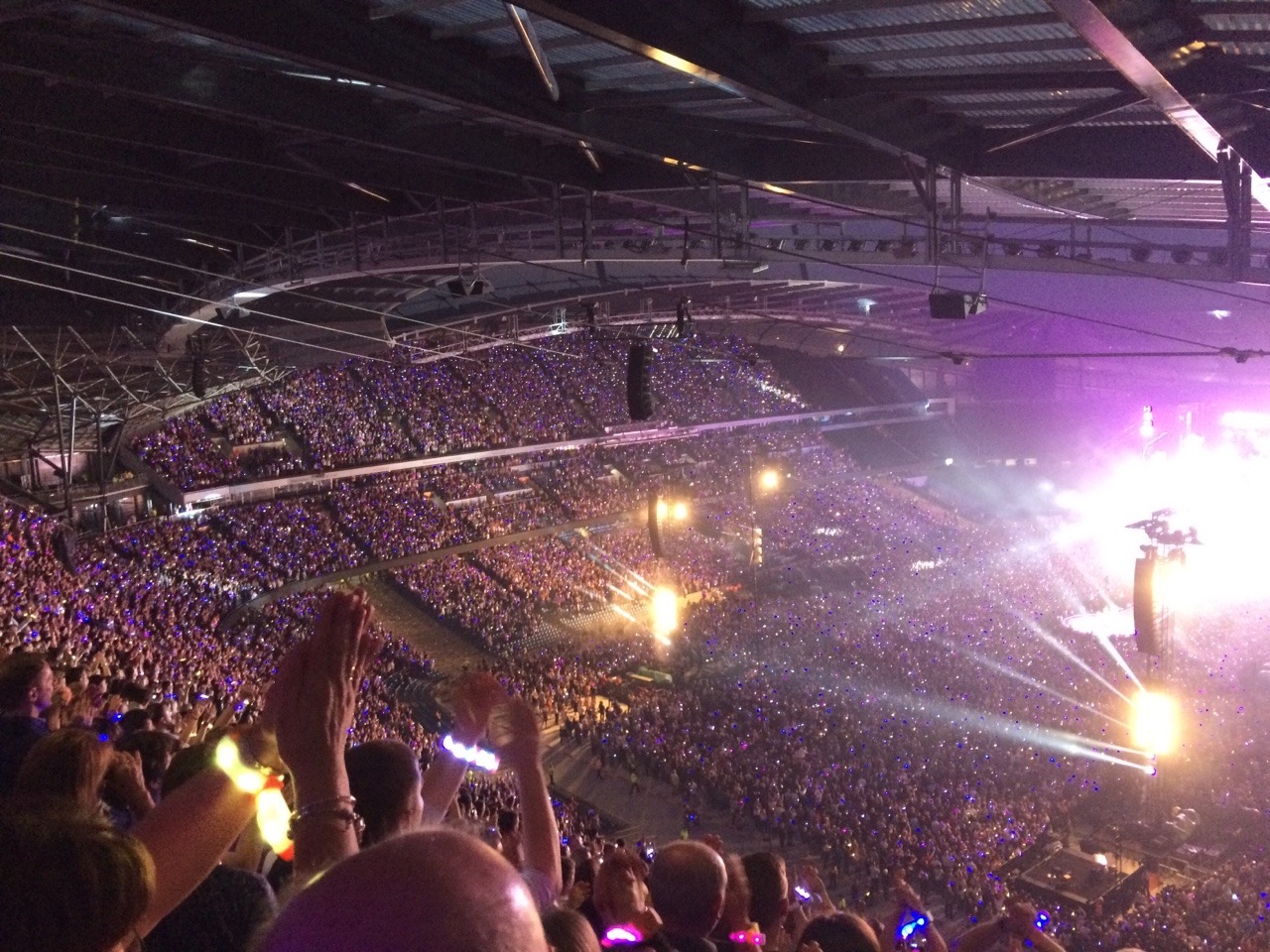 It was amazing. Beyond amazing. The visual effects were absolutely stunning and the best I’ve ever seen, as expected and more of a Coldplay concert. The atmosphere was brilliant, everyone singing at the top of their lungs regardless of tone and pitch, letting loose any and all wild contagious dance moves. The songs and Chris’ showmanship made it impossible for us to stay in our seats. At one point during Adventure of A Lifetime, he got everyone to quiet down during the bridge and once the chorus hit, everyone leapt up and so did I, not caring that I was at a very high place and that I probably looked incredibly silly. That feeling you get at gigs when everyone around you is as indulged in the music and the ambience as you are was amplified so much more at a stadium of capacity 60,000. It was phenomenal.

Two hours later, at 11PM, they ended the night with Up & Up before the credits (literally) started rolling and the stadium lights came on and we had to reluctantly leave, the magic of the night having come to a halt but still lingering upon us, evinced in our blushed cheeks, hoarse throats, sore limbs and most importantly, wide grins.

As far as concerts go (and I don’t proclaim to be a gig veteran but I’ve been to a fair few so I’m basing any personal opinions on my scarce experiences), I can, without a doubt or hesitation, conclude that Coldplay’s 2016 A Head Full of Dreams show at Etihad Stadium, Manchester was hands down the most astounding and spectacular concert I’d been to. And honestly, I don’t see how anyone could disagree with me.

8 thoughts on “A Night Full of Dreams”